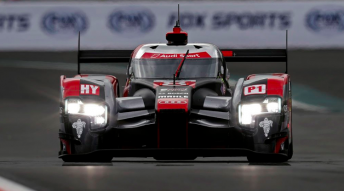 Audi has pipped Porsche for the pole in Mexico

Audi has ensured another bumper duel with Porsche after narrowly claiming pole position for the maiden Mexico 6 Hour.

Loic Duval and Lucas di Grassi have set a two-lap average at the 4.3km circuit in 1:25.06s, which shaded the leading Porsche driven by Neel Jani and Marc Lieb by .04s.

Audi is searching for only its second win of the season after setting up another absorbing contest with the WEC champions Porsche.

Along with Oliver Jarvis, di Grassi and Duval are looking to add to their win at Spa earlier in the season.

The trio finished a hard-fought second behind behind the Mark Webber, Brendon Hartley and Timo Bernhard Porsche at the previous round at the Nurburgring.

Webber and Hartley combined to qualify fourth in the #1 919 Hybrid as they attempt to continue to recover from a difficult season.

The #7 Audi of Marcel Fassler and Andre Lotterer will start from third and again act as a duo with Benoit Treluyer continuing to sit out competition with back injury.

Toyota saw the #5 of Sebastien Buemi and Kazuki Nakajima, without Anthony Davidson this weekend, will start from fifth.

G-Drive has claimed the LMP2 class pole through Bruno Senna and Ricardo Gonzalez with an average of 1:35.48.

The session was stopped when current LMP2 leader Nico Lapierre (Signatech Alpine A460) speared off at Turn 7, making hard contact with the barriers just under four minutes before the end. Lapierre and Gustavo Menezes had set the second quickest time in the class.

The red flag was shown after Lapierre went off on a fast lap at Turn 7, hitting the Tech Pro barriers hard.  The French driver recovered the car to the pits and the session resumed for a three minute dash to the chequered flag.

Aston Martin swept to the top two positions in GTE Pro with Nicki Thiim and Marco Sorensen claiming pole from the sister V8 Vantage of Darren Turner and Richie Stanaway.

The British marque will also start from pole in the GTE Am through Pedro Lamy and Paul Dalla Lana who set an average of 1:42.43s.