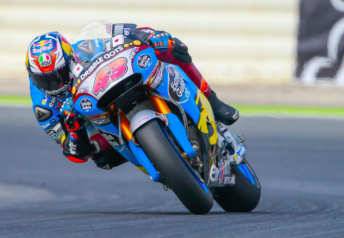 Jack Miller has been deemed fit to make his MotoGP return at this weekend’s British Grand Prix.

The Australian has been sidelined for the last two races in Austria and the Czech Republic after suffering hairline fractures to his T6 Vertebra and right wrist in a warm-up crash at the Red Bull Ring last month.

Miller had initially received medical clearance to ride at Brno two weeks ago, before a decision was taken by Honda to rest the Marc VDS racer.

However, the Assen TT winner has successfully completed a further medical examination on Thursday to allow him to make his championship return at Silverstone.

“After a medical assessment today that showed significant improvement to the back injury, Jack Miller will ride in the British GP,” read a statement on Marc VDS Honda’s official Twitter page.

Miller is set to take part in opening practice which is scheduled to begin today at 1855 AEST.