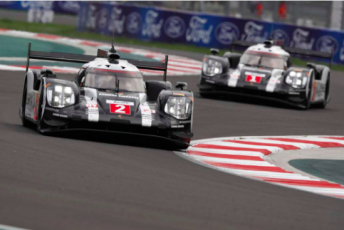 Porsche has speared to the top two positions in the second practice session at the 6 Hours of Mexico World Endurance Championship round.

Romain Dumas topped the session with a best lap around the 4.3km Hermanos Rodriguez circuit of 1:25.81.

The WEC points leader shaded the #1 Porsche 919 Hybrid of Mark Webber who set a 1:26.05s best as the championship tackled the Mexico City track for the first time.

The session was brought to a premature end when the Nissan-powered SMP Racing LMP2 machine of Victor Shaitar stopped on the circuit.

LMP2 was topped by the Bruno Senna/Filipe Albuquerque Ligier-Nissan while the Nicki Thiim/Marco Sorensen headed the GTE Pro ranks in the #95 Aston Martin Vantage V8.

Michael Wainwright was fastest in GTE Am in the Gulf Porsche 911 RSR.

Meanwhile British driver Anthony Davidson will sit out the weekend after failing to recover sufficiently from a rib injury in testing at Magny-Cours last month.

Sebastien Buemi and Kazuki Nakajima are commandeering the #5 Toyota TS050 Hybrid as a duo.

“It is disappointing to come all the way here and then not be able to race but it’s the right decision,” said Davidson.

“I wasn’t comfortable in the car this morning and there is no point to take any risks, especially with Austin coming up.

“It’s not a problem to race here with two drivers but it would be impossible in Austin due to the high temperatures.”

In the opening practice session, Marcel Fassler led an Audi one-two ahead of the Porsche pair while Buemi set the fifth fastest time.

Toyota has endured a tough start to the weekend after Stephane Sarrazin crashed heavily in the #6 TS050 forcing the team into building up a fresh car around a new monocoque.