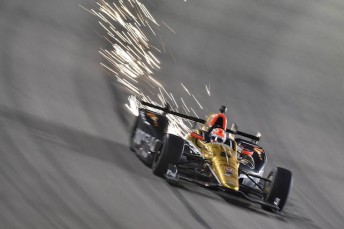 Stewards have come down hard on the Schmidt Peterson Motorsports team, ruling the car of James Hinchcliffe failed a post-race inspection.

IndyCar levied a $20,000 fine against the team and deducted 25 points each from the entrant and the driver after the #5 Honda breached the rule relating to domed skid wear.

Hinchcliffe had led 188 of the 248 laps at the Texas Motor Speedway but was beaten in a nail-biting photo finish, falling short by a mere .008s when Graham Rahal pounced toward the end of the final lap.

“In our post-race analysis this week it was determined the skid plate on the #5 entry was worn and in violation of our rules,” Jay Frye, IndyCar’s president of competition and operations, said.

“This was both a performance advantage and a safety concern, as the domed portion of the skid had been ground down to the point it would have been ineffective.”

Domed skids were added in order to prevent the cars taking flight in the case of an accident on a high-speed oval this season.