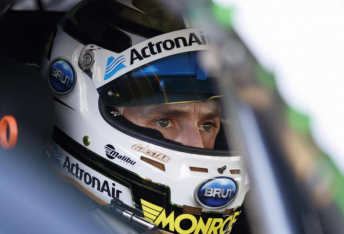 Mark Winterbottom is confident that he will be back on the pace at Sandown after a lacklustre weekend in Sydney.

The defending champion struggled for both qualifying and race speed at Sydney Motorsport Park, turning starting slots of ninth and 11th into 11th and 14th place finishes in the respective races.

Winterbottom slid from third to fourth in the championship standings as a result, seeing his deficit to leader Jamie Whincup balloon from 120 to 273 points.

The uncompetitive showing came on a weekend where team-mate Chaz Mostert banked two poles and a pair of top four finishes.

It also followed a pre-event test at Winton, from which Winterbottom emerged optimistic that gains had been made.

The team will run again at the Victorian venue ahead of Sandown – a circuit where Winterbottom led a Prodrive one-two last season.

“We just struggled with balance and getting the car where I needed it,” Winterbottom told Speedcafe.com of his weekend in Sydney, which included a tyre failure early in Sunday’s race.

“We (Winterbottom, Cameron Waters and Chris Pither) all had the same issues with balance, it was just Chaz who was happy with his car.

“We need to look at what’s different from his to mine and then go from there.”

Mostert reported an improved balance in his car over the weekend, but continued to struggle for soft tyre life over a full race stint.

Winterbottom, whose differing set-up preferences to Mostert have been well documented, said that he’d found difficulty applying lessons from Winton to Sydney.

“What we found at Winton didn’t translate that well,” he continued.

“Winton is hard (to test on) because it’s so high grip (following a recent resurface).

“The long corners (in Sydney) that go from new surface to old surface and back again, there’s so many patches.

“It’s a tough joint and we just didn’t get it right. It wasn’t good in the right spots.

“The next test should be good for Sandown.

“We are good on 90 degree corners, so when we go to Sandown the changes we make should work there.

“I’m confident we will go well at Sandown and Bathurst and those places coming up.”

Unlike last year, Winterbottom says that he won’t be thinking about the championship equation heading into the Pirtek Enduro Cup.

“If you can’t win races you can’t worry about the championship,” he said.

“They (Triple Eight) have been dominant and deserve to be leading.

“We can’t really worry about them and what they’re doing, we’ve got to get our thing back to where I want it.

“They’ve found something and they’re doing a good job so it’ll be a battle between them at the moment. We’re not in it right now.”

Winterbottom will team with Dean Canto in the Pirtek Enduro Cup this year while his former co-driver, Steve Owen, has been moved into Mostert’s entry.