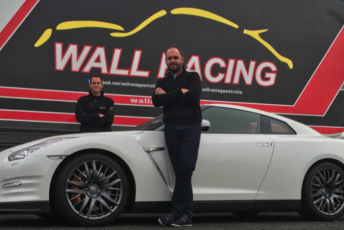 The lure of the Bathurst 12 Hour and formation of a new privately run Nissan GT-R team has prevented Brett Hobson from turning his back on motorsport.

The 30-year-old has reignited his career after confirming the purchase of two Nissan GT-R GT3s earlier this week to contest next year’s Bathurst 12 Hour and the Australian GT Championships.

The move will see Hobson Motorsport work alongside the Wall Racing operation which will run the cars acquired from American squad Always Evolving.

A switch to GT racing is a new direction for Hobson, who has spent the majority of his career competing in Supercars’ second tier.

Touted as a future talent earlier in his career, the Sydney-based driver was enlisted in the CAMS Rising Star program in Australian Formula Ford.

Six seasons in the Dunlop Series followed culminating in a challenging campaign last year with RSport Engineering which failed to yield a top 10 finish.

Hobson admits the disappointment of last season saw him question his future in the sport before the opportunity to buy a pair of GT-R GT3s arose.

“After last year I was about to throw it all away and go back to earning money and having fun, but this (opportunity) caught my eye,” Hobson told Speedcafe.com.

“I have been looking for a different avenue after last year in the Dunlop Series where I just had a really horrid season.

“I thought the next time I go back racing I wanted to be in control of my own destiny.

“I had been talking to JRM (British-based factory Nissan squad) for a long time and they guided me to Erik Davis (Always Evolving) and when their cars came available I jumped at it straight away.

“Without any Nissans in Australia full-time, it was no-brainer.”

Hobson, who hasn’t raced since the Dunlop Series round at Queensland Raceway in August last year, is yet to race a GT3 car, but is looking forward to his latest venture with the David Wall-run outfit.

Hobson and Wall are due to attend a shakedown and handover of The Nissan GT-R GT3s at Spring Mountain Motorsports Ranch in Las Vegas in October.

“I’m just excited to get back behind the wheel again and be in control of everything,” added Hobson.

“Being a racer himself he (David) knows what is involved to make sure the cars are maintained to be up the front.”

The squad is now in the process of finalising its line-ups for the February 3-5 Mount Panorama endurance classic with Hobson so far the only driver confirmed.

“In a perfect world David (Wall) and I would like to partner for the Bathurst 12 Hour alongside a third person,” he said.

“But it is up to him to find his own backing to jump in the car.

“It will be a process of starting to talk to people and working out who will be the best person for the job.

“It is very hard because you want the cars to run well, but we need people with budgets to bring sponsors and being a new team that is probably a bit harder.”

Hobson has confirmed his cars will be run separate to the factory Nissan Bathurst 12 Hour program, but is hopeful the Japanese brand will support his efforts in the future.

“I’ve approached Nissan and they are doing their own thing with the Bathurst 12 Hour,” he added.

“At the moment we are a full privateer team but we are hoping for some involvement from Nissan later on. They have got a lot of their own stuff going on.

“We are doing our own thing anyway but hopefully they will want jump on and support us as much as they can.”