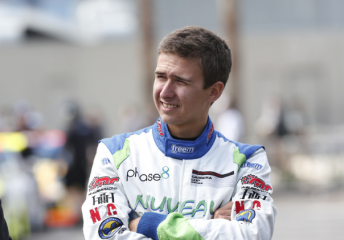 The 21-year-old Queenslander was a runaway favourite to receive the call-up having been the star of the season to date.

Campbell leads the standings by 73.5 points following a double victory last time out at Sydney Motorsport Park, where he also took out the combined race with Carrera Cup Asia.

Recent years have seen Nick Foster (2015), Sam Power (2014) and Andre Heimgartner (2012) take part in the Shootout, which provides the winner with a full funded Supercup drive for the following season.

The evaluation event will take place at a yet-to-be-disclosed European circuit on September 26-27, slotting in between the Sandown and Bathurst rounds of the Australian season.

“This nomination is a dream come true for me,” said Campbell, who will also be competing in the Pirtek Enduro Cup with Nissan Motorsport over the next two months.

“The Junior Programme has promoted many young drivers into the Porsche factory squad.

“It has been my goal to get to this point and be able to test myself against the best young Carrera Cup drivers in the world.

“I can’t wait to head to Europe and represent the Australian championship in this Shootout.”

Porsche Cars Australia Motorsport Manager, Kurt Sakzewski is confident that Campbell has the ability to win the Shootout.

The competition will see him go head-to-head with nominees from the Carrera Cups in Asia, Australia, France, Great Britain, Italy, Japan and Scandinavia.

“We have seen Matt progress from a quick, shy, quietly spoken teenager in GT3 Cup Challenge to the well-rounded and immensely talented race car driver he is today,” said Sakzewski.

“From our perspective, it would be fantastic to see Matt receive the scholarship and continue his ascent up the (Porsche) Motorsport Pyramid.

“We have seen what drivers can achieve with the support of the Porsche brand; Earl Bamber being the star success story – moving from GT3 Cup Challenge through to Le Mans victory.

“Matt has every bit of talent needed to replicate this feat.”