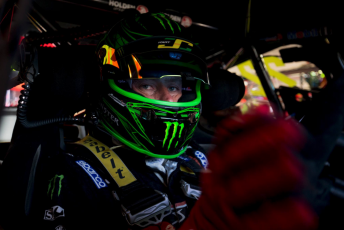 James Courtney and Nissan hold the aces in the Supercars driver market as a busy silly season continues to unfold.

Two months after DJR Team Penske confirmed its signing of Scott McLaughlin for 2017, the remainder of the key players are still yet to show their cards.

An impending decision from Nissan on its future in the category is expected, however, to go a significant way towards unlocking the remainder of the market.

Nissan is being heavily linked to former champion Courtney, whose presence would add a level of star power previously missing from the manufacturers’ Supercars efforts.

Nissan Australia CEO Richard Emery stressed to Speedcafe.com at the weekend that no driver plans can be made until a direction is set from Japanese headquarters, which is expected early next month. 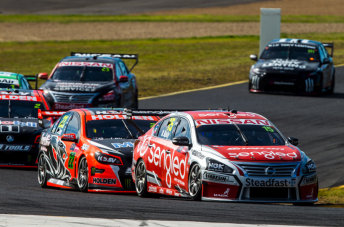 Kelly and Courtney battle in Sydney

Courtney’s affairs are being handled by long-time UK-based manager Alan Gow, whose reputation as a master negotiator has been borne out in previous contract cycles.

Much has been made publicly of options for Courtney in Japanese Super GT, where the now 36-year-old raced prior to joining Supercars in 2006.

Courtney was quick to deflect to Gow when asked of his future at the weekend, but hinted that he’ll likely remain in the Australian championship.

“I’m pretty sure I’ll be here… so unfortunately you haven’t gotten rid of me yet,” he smiled.

As previously reported, Walkinshaw is understood to be in serious talks with Penske refugee Scott Pye as its prepares for life without its Holden Racing Team nameplate.

Walkinshaw’s options appear to have narrowed amid expectations that Nick Percat is poised to join Brad Jones Racing, where he would replace Jason Bright. Ryan Walkinshaw has meanwhile quashed suggestions that his team could fill its second car with a pay driver, despite several being linked to the team.

Incumbent Walkinshaw driver Garth Tander continues to be named as a possibility to return to his former home Garry Rogers Motorsport.

GRM is, however, known to be focussing on negotiations with Volvo over its ability to continue to run its S60s next year before moving to lock in drivers.

Despite having Mark Winterbottom, Chaz Mostert and Cameron Waters under contract, Prodrive will also play a part in the silly season thanks to uncertainty over Super Black Racing.

Currently waiting for clarity over the future of the Kiwi entry following the recent death of founder Tony Lentino, Prodrive will have several options if it chooses to buy the license. Prodrive is one of four teams – together with BJR, Nissan and Walkinshaw – seen as possible homes for Simona de Silvestro should the Swiss elect to join the championship.

A sponsorship package has been put together by Supercars for de Silvestro to become the first full-time female driver in the modern era, but a deal with the driver and a team are yet to be done.

Prodrive’s Monster Energy sponsorship has also seen it mentioned in the swirling speculation over Courtney – a team he was famously linked to during previous contract cycles.

Team principal Tim Edwards at the weekend laughed off any possibility of signing Courtney, stressing that his team has an ongoing deal with Waters.

Prodrive’s Dunlop Series leader Jack Le Brocq is meanwhile among a host of drivers on the outside looking in and is known to have secured considerable sponsorship to help his bid to graduate.

His former GT home Erebus Motorsport also has a seat spare alongside David Reynolds, who joined the Betty Klimenko-owned squad this season on a two-year deal.

Those with fully confirmed line-ups for next year are Triple Eight (Jamie Whincup, Shane van Gisbergen and Craig Lowndes), Penske (Fabian Coulthard and Scott McLaughlin) and Tekno Autosports (Will Davison).

Team 18 owner Charlie Schwerkolt has declared his intention to retain Lee Holdsworth, although no formal contract has been signed.