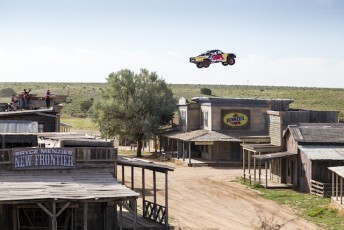 Menzies launched his 900bhp truck well past the official record of 301 feet (91.7m) by jumping over buildings in a ghost town.

He then prepared to break his new mark live on Red Bull TV however crashed during one of his final training jumps with the truck sustaining severe damage.

Menzies was taken to hospital with a broken shoulder but released on the same day.

“We broke a world record, which is incredible, we went 379 feet flying a truck,” Menzies said.

“This has been my dream and to see it come to life was surreal – it was one of the greatest moments of my life.

“I came away with a broken shoulder, that’s not bad at all, and I’m just glad I’m in the record books.”

For the jump, Menzies piloted his two-wheel drive Pro 2 short course truck, which boasts 900 horsepower and more that 500 lb.-ft. of torque, over the frontier ghost town located in New Mexico.

The 29-year-old Menzies has achieved tremendous success in offroad truck racing since breaking into the sport in 2007.

He has achieved numerous wins and championships highlighted by the Baja 500 three times.

VIDEO: Record jump over a ghost town in New Mexico