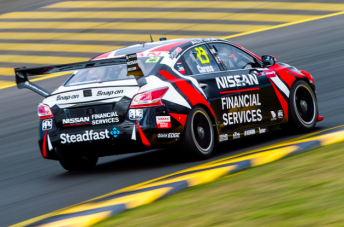 Nissan is closing on a Supercars decision

Whether the Japanese firm will continue in the category beyond 2016 has proven a drawn out saga and continues to await confirmation of Nissan’s global motorsport direction.

Speaking at the weekend’s Sydney Super Sprint, Emery confirmed to Speedcafe.com that key meetings will be held in Japan in early September that will almost certainly include a decision on the Supercars program.

Nissan Australia has already submitted its preferred strategy to management, which is understood to opt for a status quo with Kelly Racing and its 5.0 litre V8 Altima package.

“All the homework, all the briefings, everything is now done.

“It’s just waiting for them to have the right people in the right room at the right time, which is planned over the next couple of weeks and then we’ll know where we are.

“I think by the middle of September I’ll have a pretty good idea.”

Holden’s recent recommitment to the category has brought widespread optimism in the Supercars paddock that Nissan will follow suit.

The General Motors brand’s latest deal with Triple Eight ties it to the championship for another three seasons and includes the development of a new, V6 turbo-powered car for 2018.

Emery meanwhile says that a range of decisions, including whether it will continue with a car in factory Nissan Nismo livery, would follow soon after any commitment was made.

“There are such a range of possibilities that could come out of Japan, they could say ‘you can keep going but you can only spend X’, which would preclude a lot of things,” he explained.

Michael Caruso, who currently drives the Nismo-branded entry, is out-of-contract at year’s end and has yet to be offered a new deal while the team waits on Nissan’s decision.

Its other seats are currently filled by team co-owners Rick and Todd Kelly and new-for-2016 recruit Dale Wood, who brought considerable backing to steer the fourth entry.

“Anything about drivers for us next year would be pure speculation at this point in time,” said Emery.

“We have to make the first decision first, which is are we going racing? Then we’ll start worrying about who drives the cars. We haven’t got that far yet.

“I’m sure the team is looking at their options and that people are talking to them as well, but they are in no position to do anything with that because they don’t have a decision from us.”