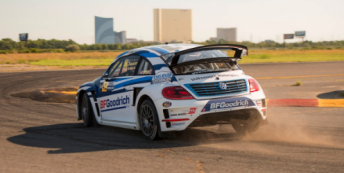 After a month break, the championship saw Speed claim his third consecutive win with the former F1 driver moving into the lead on the season standings.

There were several withdrawals in the 12-car, eight lap final including series debutant Chris Atkinson in the Subaru Rally Team USA entry who suffered a puncture after enjoying a solid run.

Atkinson qualified for the final after finishing third in semi-final A.

Speed now holds a nine-point lead over Foust ahead of the next round in Seattle on September 17. Red Bull understudy Pierre Gasly landed his third win of the season by taking the feature race at Spa.

Making a solid start from the front row Gasly powered into the lead after polesitter and team-mate Antonio Giovinazzi missed the getaway.

However, Italian Giovinazzi made amends by scoring victory in the sprint race from Rapax man Gustav Malja while Luca Ghiotto (Trident) was third.

Malja started strongly from pole before Giovinazzi began a charge from P3 when he moved up to second after nabbing position off Ghiotto at La Source.

Gasly will now carry a 17-point lead going into the Monza round next weekend ahead of Giovinazzi. Dennis (Arden International) was on a surge but fell 2.3s short as Leclerc pushed out his lead in the series.

Arden International’s Jack Aitken broke the ice in the series to record his maiden win.

In a caution-strewn race, Aitken prevailed by 1.7s from Trident star Antonio Fuoco while Santino Ferrucci (DAMS) was third.

Ahead of the next round at Monza next weekend, Leclerc shows the way on 161 points from Fuoco on 139. During the two-hour and 40-minute race, the Corvette duo managed to stay ahead of the Chip Ganassi Racing Ford GT of Dirk Mueller and Joey Hand.

The race finished with a one-lap run to the flag following a late race caution.

The Porsche 911 RSR of Kiwi Earl Bamber and Fred Makowiecki was third.

The Lamborghini Huracan GT3 duo managed to withstand a concerted fightback from the Audi R8 LMS GT3 of Lawson Aschenbach and Matt Bell.

But in a post-race sequel Lally and Potter were excluded for a ride height breach with their R8 which saw the Stevenson Motorsports’ Audi of Robin Liddell and Andrew Davis elevated to third. 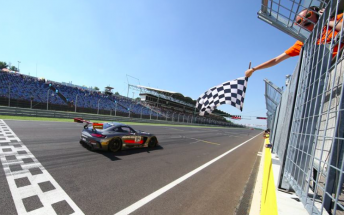 HTP Mercedes took the honours in the latest lancpain GT Sprint Series round at the Hungaroring.

Ide’s dive at the first corner pushed Vautier wide allowing Buhk to sweep into the lead.

However, Vanthoor and Vervisch were stripped of their second place after receiving a post-race penalty for an unsafe release in the pits. The sanction saw them drop to eighth position.

Ide and Mies inherited second while Rene last and Will Stevens brought the #28 WRT Audi R8 home in third.

The weekend’s qualifying race was won by the Ide/Mies Audi, who now leads the championship standings by 17 points ahead of the final round at Barcelona from October 1-2. 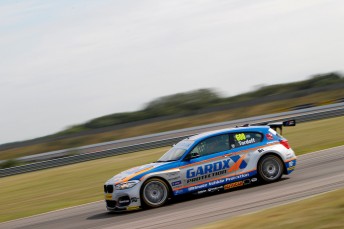 Sam Tordoff continues to lead the British Touring Car Championship after scoring only his second victory of the season at Rockingham.

The West Surrey Racing driver produced an impressive come from behind drive after starting from fifth row of the grid.

A opening lap incident involving several of the front runners aided Tordoff’s charge to fifth before he set his sights on the lead group.

Team BKR’s Aron Smith ended the weekend by becoming the 12th different winner of the season when he emerged victorious in the reverse grid race.

The Volkswagen driver just held off Shedden by 0.4s to take the win, with The Team BMR Subaru of Colin Turkington in third.

Armed with 75kg of success ballast, Tordoff struggled to the finish in 16th position.

Team Dynamics driver Shedden won the opening heat of the round with a dominant drive to victory from Jackson and Team BMR’s Jason Plato.

Tordoff holds a five point lead in the championship ahead of the penultimate round at Silverstone from September 17-18. 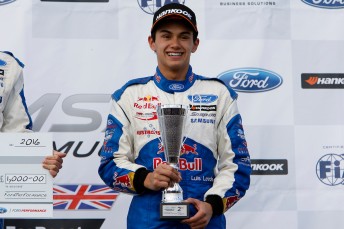 The Red Bull junior has fallen 35 points shy of the championship leader Max Fewtrell after scoring just one top five from the three races.

Leeds’ weekend began with a seventh place finish in the opening rain-affected heat, before bouncing back to finish second in the following race, behind title rival Sennan Fielding.

However, the Melbourne racer was unable to build on his podium result as he finished 10th in the final encounter.

It proved to a challenging weekend for fellow Aussie Zane Goddard who finished ninth, 10th and 12th in the three races.

James Pull, Fielding and Fewtrell shared the honours in the three races.

The championship heads to Silverstone for the penultimate round of the season from September 17-18.