Nico Rosberg produced a faultless drive to win a drama-filled Belgian Grand Prix which was red flagged in the early laps following a frightening crash for Kevin Magnussen.

The Mercedes driver made no mistakes from pole position as he led from start-to-finish in a race littered with incidents, highlighted by a stoppage after just nine laps.

Officials deployed the red flags to conduct barrier repairs after Magnussen lost control of his Renault at Raidillon on lap six, which resulted in a heavy impact with the tyre wall.

The Dane climbed out of the car unaided and escaped the incident without serious injury. 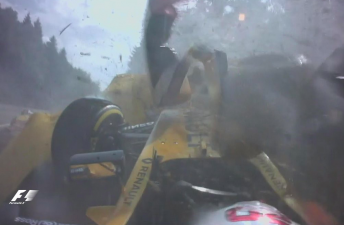 Rosberg maintained his lead through the pit stops to take the flag by 14 seconds from Ricciardo, who impressed throughout to finish second in consecutive races.

Lewis Hamilton provided a textbook damage limitation drive to claim third, having started from the rear of the grid.

Hamilton’s rise through the field was aided by an incident-filled start, underlined by a collision between Red Bull’s Max Verstappen and the Ferrari duo of Kimi Raikkonen and Sebastian Vettel.

Starting from second, Verstappen fired his Red Bull down the inside of Raikkonen at La Source which sparked contact that damaged the front wings on both cars.

The chain reaction saw Raikkonen clip Vettel into a spin sending him down the order.

A tyre blowout for Toro Rosso’s Carlos Sainz on the Kemmel straight a lap later and a clash between Jenson Button (McLaren) and Pascal Wherlein (Manor) also aided Hamilton’s charge.

Hamilton occupied fifth when the race was stopped. He soon picked off Fernando Alonso (McLaren) and Nico Hulkenberg (Force India) to move into the podium places when the green flags flew.

The Brit dropped back after being forced to make a third stop for tyres, but powered past Hulkenberg in the closing stages to claim a podium finish.

Hulkenberg was left to settle for fourth on a strong day for Force India which ended with team-mate Sergio Perez in fifth.

Vettel managed to successfully recover from the opening lap spin to finish sixth ahead of Alonso, who ran as high as fourth before dropping back to seventh.

Williams’ Valtteri Bottas came through to claim eighth ahead of Raikkonen, who was involved in several fractious moments with Verstappen during the race.

The top 10 was completed by the sister Williams of Felipe Massa, while Verstappen’s highly eventful race ended in 11th position.

The Haas F1 pair of Esteban Gutierrez and Romain Grosjean finished in 12th and 13th, while debutant Esteban Ocon (Manor) came home a lap down in 16th position.

Hamilton’s championship lead has been cut to nine points ahead of the Italian Grand Prix from September 2-4.