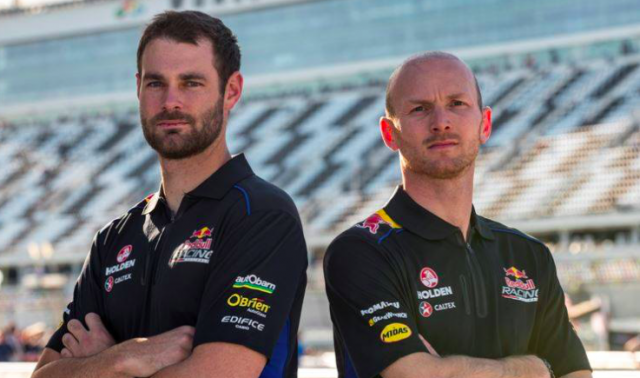 French ace Alex Premat is today behind the wheel of a Red Bull Holden for the first time as he prepares for the Pirtek Enduro Cup.

Premat is one of many co-drivers cutting laps today at Sydney Motorsport Park for what has become an annual multi-team ride day at the venue.

Red Bull’s signing of the 34-year-old to partner Shane van Gisbergen has been the most scrutinised off-season co-driver move due to its potential impact on the title battle.

Premat, who co-drove alongside Scott McLaughlin at Volvo over the last two years, spent the weekend in Sydney getting to know his new team.

He will stay in the country for all but 12 days over the next two months, making only a brief trip back to his base in Las Vegas, Nevada, following the Sandown 500.

Although having to run with a passenger aboard for each of his laps today, Premat says that the rides will provide a useful warm-up ahead of Red Bull’s single pre-Sandown test day at Ipswich.

“I’m looking forward to jumping in,” Premat told Speedcafe.com of the day ahead.

“It will allow me to feel the difference between the Volvo and the Triple Eight car.

“I’m sure it will be different, the chassis, the engine, all of that. I need to adapt.

“But I’m feeling good in the team and have had a really good welcome.

“It’s been pretty cool to see over the weekend how Red Bull operates.

“It’s very, very impressive. Everything is smooth and very relaxed.”

Premat laughed off those who have criticised his signing, which has been painted as risky due to the fast and aggressive style he displayed at GRM.

Having driven at the highest level of sportscar racing and in Formula 1’s feeder series GP2, Premat says he welcomes the challenge of helping Van Gisbergen’s championship quest.

“I have followed the comments from all the people. I think it is funny,” he said.

“I’ve been an Audi factory driver at Le Mans. They are spending $150 million for that race, so you need to handle the pressure.

“I feel comfortable here with Shane and Triple Eight. I know the target is huge because he is fighting to win the championship.

“The co-driver has a huge responsibility, but I feel confident on that.

“Red Bull wanted a strong driver with Shane and they didn’t pick me because they like my accent. I have proven that I can do the job.

“Jono Webb (who co-drive with Van Gisbergen at Tekno) was a potential but I think they analysed all the data from the last two or three years and made their choice.

“I talked also with Scott and Garry (Rogers) for that seat and with Prodrive as well because Chaz Mostert wanted to have me for his car.