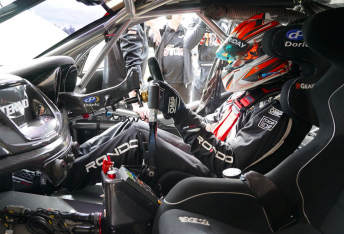 Nathan Morcom has experienced a Supercar for the first time with a stint behind the wheel of a Tekno Autosports Holden Commodore at Sydney Motorsport Park.

The Gold Coast squad drafted the 24-year-old in to help with a team ride day at the Western Sydney venue alongside primary driver Will Davison.

Morcom, who drives a Tekno Autosport McLaren 650S in the Australian GT Championship, completed approximately 25 laps as he shared the running with Davison.

Having focussed his career on GT racing in recent times, Morcom admits the brief run has ignited his interest in Supercars.

“The run was spoken about but hadn’t been set in concrete until the weekend,” Morcom told Speedcafe.com.

“It lived up to my expectations. The car had a lot more grip than I thought it would.

“You have to manhandle these cars a lot more to get a lap out of it, but when you do that it is pretty rewarding.

“The main thing was to get comfortable in the car and make sure the passengers had a good experience.

“There has always been interest there as it is Australia’s biggest class. I would like to get into the enduros in the future.”

Morcom has also confirmed that he will contest the remaining two rounds of the Australian Endurance Championship at Hampton Downs (October 28-30) and Highlands Park (November 11-13).

The reigning Bathurst 6 Hour winner will continue his partnership with Grant Denyer in the Tekno Autosports McLaren, which has yielded a victory in the Phillip Island 101 and a fourth place finish in Saturday’s race at Sydney.