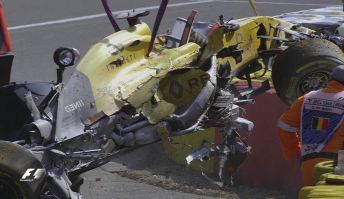 Kevin Magnussen has sustained a cut to his ankle as he avoided serious injury from a nasty crash that ultimately red flagged the Belgian Grand Prix.

The Danish driver lost control of his Renault at the high speed Raidillon corner on Lap 6, which resulted in a heavy impact with the barriers, and a subsequent stoppage to repair the tyre wall.

Magnussen managed to climb from the cockpit of his car unaided but was seen limping before visiting the Spa-Fracorchamps medical centre.

Renault has confirmed that the 23-year-old suffered a minor cut to his left ankle and was conscious throughout the crash.

Magnussen has since been taken to a nearby hospital for further precautionary checks.

The team remains hopeful that their driver will be deemed fit to contest the Italian Grand Prix (September 2-4).

“He (Kevin) looks ok but he went to hospital just for a check up,” said Renault team principal Frederic Vasseur.

“He has a small cut on the ankle and they (the doctors) have done a X-ray. It looks ok, but we will have to wait for the full scan.

“It is difficult to know what caused it (the crash) but he had a lot of wheel spin on the kerb.”

Magnussen’s car was severely damaged in the incident which will require a new chassis to be built up for the visit to Monza.