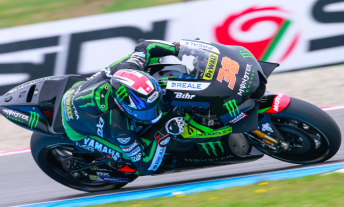 Bradley Smith has been ruled out of the next two MotoGP races including this weekend’s British Grand Prix.

The Tech3 Yamaha rider sustained ligament damage to his right knee in a practice crash ahead of last weekend’s Ochersleben 8 Hours endurance race.

The injury will see the 25-year-old sit out his home round at Silverstone this weekend and the visit to San Marino’s Misano circuit a week later from September 9-11.

Tech3 Yamaha has confirmed that Yamaha World Superbike rider Alex Lowes will deputise for Smith in the two races.

The arrangement comes after the British rider sampled a Tech3 Yamaha during an official MotoGP test at Brno two weeks ago.

“The Tech3 team wants to thank the Yamaha Official World Superbike Team for their co-operation in allowing Lowes to ride and would also like to wish Bradley Smith a quick and full recovery,” read statement from the Tech3 Yamaha squad.

Smith is in his final year at the satellite Yamaha squad having secured a move to the new KTM factory outfit for 2017.