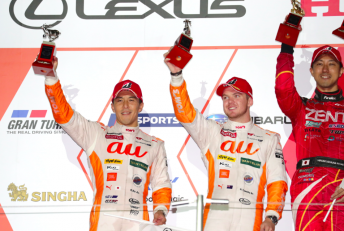 The Kiwi and Japanese co-driver Daisuke Ito were forced to scythe their way through the field in changeable conditions after qualifying in a disappointing 11th position.

Cassidy twice took the lead during his hour long stints at the wheel of the TOM’S Lexus, but pit stop strategy and the intervention of yellow flags hampered his victory hopes.

However, a strong showing throughout the race was ultimately rewarded with a second place finish as the pair just fell shy of the winning Yuji Tachikawa/Hiroaki Ishiura Lexus by 1.2s.

The CRAFTSPORTS Nissan GT-R secured the final spot on the podium a full 1 minute and 15 seconds back.

The Super GT Championship heads to Thailand’s Chang International Circuit for the seventh round from October 8-9.