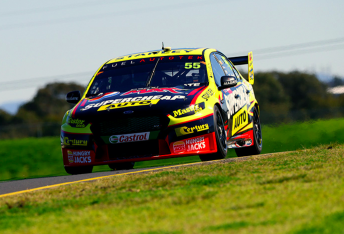 Chaz Mostert continued his fine qualifying form by recording his fifth Armor All Pole Award of the Supercars season at Sydney Motorsport Park.

Mostert shot to the top of the order with a 1:29.44s effort midway through the 20 minutes before electing to sit out the remainder of the session.

The move enabled the Prodrive Ford driver to save a brand new set of tyres for the afternoon’s 200km race.

Mostert, who finished fourth after starting from pole yesterday, has now gone a full 12 months without a race win.

“The boys have given me a fantastic car this weekend,” smiled Mostert.

“It’s fantastic to have five poles this year, but I really want to get that win.

“Hopefully saving that set of tyres can help us out today.”

It was another tough session for title contender Mark Winterbottom, who will start 11th.

Courtney triggered the Turn 5 kerb sensor on his final run but refused to blame the breach for his disappointing starting slot.

“It’s hugely frustrated, I’m gutted because we should have been up there,” said Courtney.

“It just didn’t come together this morning… the car wasn’t good enough to be up the front.