Moffat ‘gutted and confused’ by penalty

Moffat ‘gutted and confused’ by penalty 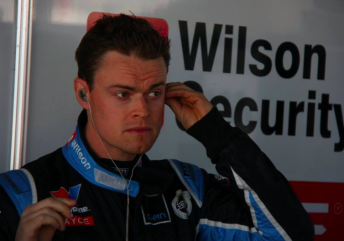 A frustrated James Moffat has criticised a ‘severe lack of consistency’ from stewards after a late penalty denied him a season best finish in Race 19 at Sydney Motorsport Park.

Moffat tagged Shane van Gisbergen into a spin at Turn 8 with four laps remaining while the pair battled for fourth.

The Volvo driver immediately ceded position back to his Holden rival, who rejoined fifth after Fabian Coulthard took advantage of the drama.

Moffat was then handed a drive-through penalty for his mistake, dropping from sixth to 18th as he toured the pitlane.

It was a cruel blow for the 32-year-old on a day where his horror first season with Volvo appeared to finally have turned a corner.

Speaking to Speedcafe.com in the Sydney paddock post-race, a calm and reserved Moffat said he was one of many confused by the severity of the penalty.

“I saw a hole there and I thought, with where I am in the championship and how the year is going, I was always going to have a crack,” he said of the incident.

“I was a bit surprised when he came back down, but it was no fault of his.

“I readdressed straight away but then the penalty came through.

“I’m a bit confused by that and it seems like the reaction in pitlane is very similar.

“I’ve had some text messages already from people in pitlane that I wouldn’t already get messages from.

“Let’s just say that it seems like the overwhelming consensus at the moment is that it wasn’t a very logical decision.

“Shane lost one position, he went from fourth to fifth. If he had fallen back to 20th, you’d have said ‘yep, fair deal’.

“But effectively we’ve copped close to a 70 point penalty by being given a PLP when we were running sixth and falling back to 18th. I’m not sure if that penalty fits the crime.

“When your day can be almost dictated by one person in that way it’s hard to take.

“There’s a severe lack of consistency. That’s as much as I can say.”

Moffat sits 18th in the championship after 19 races with just three top 10 finishes to his name.

The speed in Sydney has, however, given Moffat encouragement heading into the Pirtek Enduro Cup.

It is expected, but not yet confirmed, that Moffat will be paired with the team’s Dunlop Series driver James Golding for the three events.

“I’ll take some positives out of the day, the car speed is much improved and hopefully we’ve found something with the car that we can keep going with for the rest of the year,” Moffat added.

“Racing door-to-door with Scotty (McLaughlin) at the start was really good fun, probably more for Scotty than me because I don’t think he’s been in that situation (with a team-mate).

“I’ve been there before with the brothers (Kelly) and Caruse (Michael Caruso) over the last few years.

“But that’s what made it so disappointing. It was going to be a great result for the team and it got taken away from them.”