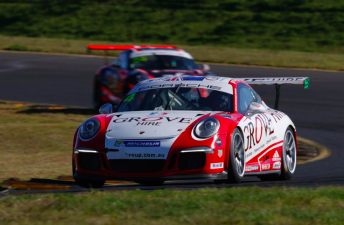 Grove had to work for his win, however, as traffic reduced a one-second lead to a grandstand finish with Yuan Bo.

Bo had joined the TAG Heuer Carrera Challenge driver on the front row, but bogged down at the start and dropped to fourth.

Shane Smollen slotted in behind his Australian counterpart but faded towards to end of the 10-lap race.

The McGrath Estate Agents driver committed a pressure mistake in running wide at Turn 2 on the penultimate lap, allowing a recovering Bo through.

In front, Bo closed right up to the rear of the Grove Hire machine rounding Corporate Hill for the final time, but Grove hung on for his first individual outright Carrera Cup race win.

The race was marred by a number of incidents, the most bruising being the Lap 3 clash between Tony Bates and Adrian Mastronardo as they attempted to negotiate a slow-moving Wang Xi.

Mastronardo moved to round up Wang exiting Turn 6 but instead drove into the path of Bates, who rode up on the rear corner of car #39.

James Bergmuller and Scott Taylor spun at the same corner three laps later when the former moved across the latter’s nose under brakes.

The Professional class drivers will have their own combined race this afternoon at 1605 AEST.