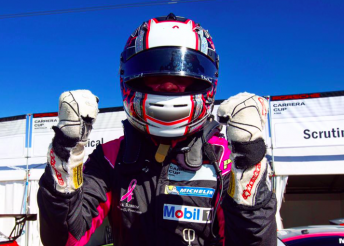 Mitchell Gilbert came through an eventful Carrera Cup Asia race to claim his second victory as he took advantage of a crash from championship leader Maxime Jousse.

Fresh from his win at Sydney Motorsport Park yesterday, Australian racer Gilbert stormed into the lead from second on the grid, ahead of Martin Ragginger and Andrew Tang, while pole-sitter Jousse dropped to fourth.

Gilbert quickly opened up a 1.3s lead before he ran wide at the final corner which brought him closer to the chasing pack behind.

However, the complexion of the race changed on lap 4 when Jousse tried an audacious move at Turn 2.

The Frenchman made contact with Tang that pushed him wide, which in turn helped Ragginger into a spin. The move was to be investigated by stewards after the race.

Jousse was promoted to second as he set his sights on Gilbert who started to struggle for pace in his Absolute Racing entry.

On the following lap Jousse slipped into the lead with a move on Gilbert, who locked up at Turn 8.

Meanwhile, Tang slumped to sixth and Ragginger dropped to 12th position behind the charging Nico Menzel, who started from the back of the grid.

Once in front, Jousse opened up a 4.3s lead over Gilbert before drama struck on lap 11 when he ran off the road and into the tyre wall at Turn 10.

The incident saw Gilbert inherit the lead which he held until the chequered flag to clean sweep the round.

A strong run from Class B runner Vutthikorn Inthraphuvasak saw the Thai driver climb to second at the flag, while the recovering Tang secured the final spot on the podium.

Tang was challenged for the spot on the penultimate lap by Ragginger at Turn 2, which resulted in the Austrian suffering his second spin at the corner.

As a result, the hard charging Menzel came through to finish fourth as Ragginger just pipped China’s Yue Cui to fifth by 0.006s in a drag race to the flag.

Yuan Bo was set for a strong finish inside the top six before a mechanical issues saw him retire in the closing stages.

The Carrera Cup Asia field will feature in two combined races with Carrera Cup Australia competitors later this afternoon to round out the championship’s Australia visit.