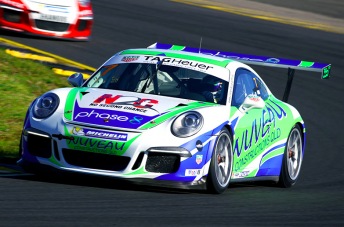 After recording a clean sweep of the two Carrera Cup Australia championship races, the Queenslander produced another dominant display to see off the best drivers from both Australia and Asia.

Campbell faced a brief challenge from Carrera Cup Asia series star Maxime Jousse on the opening lap as the pair went side-by-side into the first corner.

However, the McElrea Racing driver quickly asserted his authority on the race by taking the lead at Turn 2.

Once ahead he produced a measured drive to the chequered flag, but was unable to relax with Nick McBride in hot pursuit.

Starting from fifth, McBride made light work of David Wall at the start before passing Carrera Cup Asia round winner Mitchell Gilbert and Jousse.

Despite showcasing impressive pace, he couldn’t launch a serious attack on Campbell as he fell 0.8s shy at the flag.

A storming run from seventh saw Alex Davison claim the final spot on the podium after making decisive moves on Gilbert and Jousse early in the race.

Dean Fiore came through to finish sixth ahead of the Malaysian-born Australian Gilbert, who had earlier won both Carrera Cup Asia championship races.

Duvashen Padayachee was the only retirement from the race, exiting the heat after seven laps.

VIDEO: Campbell speaks after the race