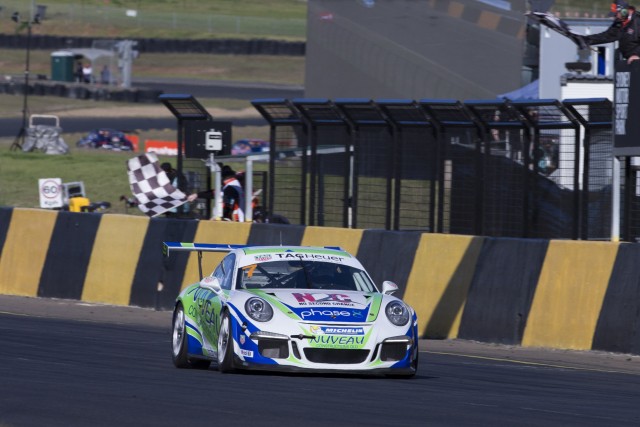 Matt Campbell completed the double-double with a sweep of both races in the Carrera Cup Australia at Sydney Motorsport Park to go along with his back-to-back wins at the same venue earlier this year at the Rennsport Festival.

Add that to his results last year and he has six race wins from seven contested at the Sydney venue in the Carrera Cup.

Campbell completed another dominant weekend after scoring pole and victory in the first race. A lightning start again set-up the victory as he put a gap on David Wall and Nick McBride.

McBride had a race long battle with Alex Davison, with Dean Fiore sitting in behind.

Through to the finish and Campbell was unchallenged at the front as his victory also stretched his championship lead to 73.5 points over Davison and McBride.

After a spin in the opening race, Ash Walsh drove through for a strong sixth place finish ahead of Steve Richards.

Plenty of action in the Tag Heuer Carrera Challenge with Shane Smollen taking the victory in the semi-professional class.

A clash between Tony Bates and Adrian Mastronardo put championship leader Bates on the back foot. This allowed Race #1 winner Stephen Grove into the fight after a poor start. He eventually passed Mastronardo on the final lap to finish second in the race, but the overall winner in the Tag Heuer Carrera Challenge for the round.