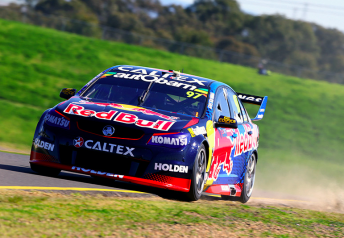 The Red Bull duo dominated the opening heat at Sydney Motorsport Park from the outset, making short work of pole-sitter Chaz Mostert on the opening lap.

Mostert led the first three corners before Van Gisbergen and then Whincup carved their way through.

Whincup shadowed his team-mate as the duo conserved their rubber throughout the opening stint, taking the lead when Van Gisbergen dived for the pits on lap 14 of 31.

The six-time champion stayed out for a further three laps before pitting and rejoining back in fourth.

On fresher tyres, Whincup wasted no time in climbing over Craig Lowndes and Scott McLaughlin before setting after Van Gisbergen.

The Kiwi held his nerve over the final laps, driving faultlessly to win by just 0.25s.

“I thought Jamie might have been held up by those guys but he cut straight through them,” said Van Gisbergen.

“I just held my line. I made one mistake at Turn 1 and had to defend but other than that it was pretty cool. I definitely enjoyed that one.”

“It all came down to track position at the end of the day,” added Whincup, who remains on 99 career wins after three consecutive second place finishes.

“We’ve both got pretty much exactly the same set-up now.

“The aero understeer is crazy around this place. I just couldn’t quite get close enough.”

Whincup’s charge had been made all the more dramatic by puffs of smoke emerging from his car’s right-front wheel on the final lap.

“I don’t know what happened there, it felt fine,” he said.

As expected on the high degradation layout, pitstop timing had a major impact on the result throughout the field.

Teams balanced pitting early for track position or late to ensure they had speed at the end.

James Courtney ran third early, dropped to eighth in the pitstop cycle, before carving his way back through to the final podium spot.

Mostert played a similar game on his way to fourth ahead of McLaughlin, Lowndes, Tim Slade, Garth Tander, Rick Kelly and Fabian Coulthard.

Ninth placed qualifier Mark Winterbottom could manage no better than 11th, losing ground to his Red Bull rivals in the title fight.

Scott Pye was in the thick of the battle during the early stages, running fifth when he slowed with a power steering failure on lap eight.

The Supercars field will return to the track for qualifying at 1140 local time tomorrow before the 200km Race 19 at 1400.