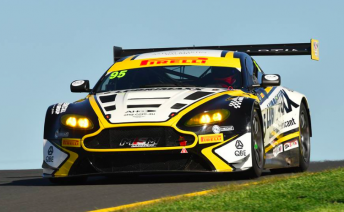 Andrew and George Miedecke on their way to victory

The father and son pairing of Andrew and George Miedecke took out the second round of the Australian Endurance Championship despite incurring a post-race penalty.

The Aston Martin duo were in contention for the victory throughout the 101 lap enduro at Sydney Motorsport Park which ran without the introduction of a Safety Car.

Aided by a shorter stop time, Andrew Miedecke rejoined the race comfortably ahead of the Porsche with co-driver Duvashen Padayachee at the wheel.

However, victory hopes were hanging in the balance after Miedecke was issued with a five second post-race penalty for exceeding track limits.

This coincided with an impressive hard charging stint from Carrera Cup driver Padayachee as he scythed his way through the field to second.

Although, the second pit stops extended the gap between the pair which allowed George Miedecke to guide the car to the chequered flag.

Martin tried his best to cut the deficit in the final stint but fell 17 seconds shy at the finish.

A strong final stint from Nathan Antunes saw the GT Motorsport Audi R8 GT3, he shared with Greg Taylor, claim the final spot on the podium.

The pair maintained a place inside the top 10 throughout before Antunes stepped in for the final stages of the race.

The run to the flag saw Antunes overtake the #6 Skwirk Audi R8 which had threatened for a podium after a stunning middle stint from Liam Talbot.

The Amateur class winner of the Spa 24 Hours hauled the car from outside the top 10 to the lead before making his final stop to hand the car back to co-driver Jake Fouracre.

Fouracre’s race ended in disappointment as contact with John Bowe, who was trying to unlap himself, triggered a puncture on the final lap that saw him limp home in 10th position.

After struggling in the early laps, Warren Luff brought the Tony Walls owned Objective Racing McLaren to the finish in fifth, in front of the Dominic Storey/Peter Hackett Eggleston Motorsport Mercedes.

An eventful race for the Darrell Lea McLaren 650S ultimately ended in a seventh place finish for Klark Quinn and Daniel Gaunt.

Quinn held the lead after running to lap 50 before the first stop which provided the first moment of drama.

Quinn lost valuable time as he almost ran out of fuel prior to his stop that was delayed by a fuel rig leak in the pits.

The McLaren then caught fire in the pits during the second stop that saw co-driver Gaunt lose even more time before rejoining the race.

It proved to be a disastrous race for the Supabarn Supermarkets Audi R8 GT3 of Marcus Marshall and Theo Koundouris as a driveshaft failure on the warm-up lap prevented them from taking the start.

The duo had qualified on the front row alongside the Martin/Padayachee Porsche.

The JBS Lamborghini of David Russell and Roger Lago retired after their race had been hampered by an early puncture.

Peter and Alex Rullo were the only other retirements in the LDM run Lamborghini.

The Australian Endurance Championship moves to New Zealand for the Hampton Downs 101 from October 28-30.