Menzel back on track with spare Porsche

Menzel back on track with spare Porsche 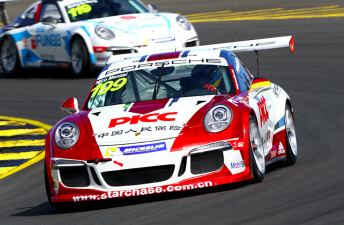 Nico Menzel’s championship campaign has been thrown a lifeline with the fast German able to take the grid in a spare car for today’s Carrera Cup Asia opener at Sydney Motorsport Park.

Menzel, who currently trails Maxime Jousse by only two points, appeared sidelined for the balance of the weekend after contact with Xi Wang during qualifying saw the Team StarChase entry roll at Turn 3.

However, the team has been able to source a spare Porsche 911 GT3 Cup Car from DNA Racing, which was transported from Melbourne overnight.

Carrera Cup Australia brokered the deal, which was made possible due to the common technical specification which is run in Carrera Cup championships around the world.

“We got a spare car,” confirmed Menzel.

“It was not clear yesterday but now we are very happy to have one.

“For the first race it seems to be that I have to start at the back of the grid, but even then it’s possible to get some points.

“Our goal is to get a top 10 or just to get some points. At the end of the day these points maybe can decide a championship.”

Menzel had originally qualified fifth on the grid for both of the weekend’s championship races.

The PICC-backed entry is now clearly the car to watch as Menzel attempts to cut through the 24-car field, which like its Australian counterpart is a mix of professional and amateur drivers.

“Yesterday was not the best day of my life, but it’s alright now,” he said.

“It’s a challenge to catch up some positions from the back of the grid and now we have to make the best of this unusual situation. I’ve never had it before in my life.”