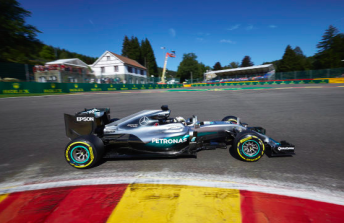 Mercedes elected to fit another power unit to Hamilton’s car at Spa-Francorchamps in a bid to bring more engine components into his allocation for the remaining eight races of the season.

A series of failures earlier in the year left Hamilton on the verge of exceeding his five power unit and component allocation for the campaign.

The Brackley squad introduced new engines prior to both 90 minute practice sessions on Friday, which triggered two 15-place penalties, pushing the championship leader to the back of the grid for Sunday’s race.

Under FIA regulations, the first time a sixth engine component is installed incurs a 10-place grid penalty, followed by a further five-place drop if other components are changed.

The use of a sixth internal combustion engine, eighth MGU-H and turbocharger, and a sixth MGU-K sees Hamilton face another 25-place grid drop increasing his overall penalty.

McLaren’s Fernando Alonso has also been issued with a 35-place grid penalty for a full power unit change, while Sauber’s Marcus Ericsson has a 10-place drop for an internal combustion engine switch.