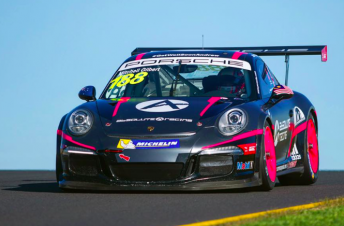 Gilbert, born in Malaysia to Australian parents, jumped best from the outside of the front row and squeezed pole man Maxime Jousse into submission at the first corner.

With Martin Ragginger and Andrew Tang attacking the second-placed Frenchman, Gilbert was able to skip clear of the chasing pack.

The 22-year-old’s advantage approached two seconds at the halfway mark of the 16-lap encounter, before Jousse dropped his two challengers and began to close in on the leader.

The Frenchman cut the margin down to less than a second before dropping back. However, traffic late on compressed the top three for a close finish.

Gilbert had enough in reserve to greet the chequered flag first, ahead of Jousse and the Austrian Ragginger, who walked the tightrope of four ‘ kerb hops’ for the majority of the race.

Tang, on the other hand, breached the track limits at the Turn 5 exit for a fifth time on the penultimate lap, but the consequent five-second time penalty was not enough to cost the Singaporean fourth place.

There were a number of spins during the race, the wildest moment coming on Lap 2 when Vutthikorn Inthraphuvasak got crossed up on the kerb at the final complex.

Taiwanese Tiger Wu then encountered a spin as he attempted to evade the stricken Thai driver.

The German was only able to take the grid following the delivery of a spare car from Melbourne overnight.

Menzel rolled his own Team StarChase vehicle in a qualifying incident with Wang Xi on Friday.

A further 16-lap race will be held tomorrow from 0940, before combined races with Carrera Cup Australia competitors for the Challenge and Professional classes round out the championship’s Australia visit.