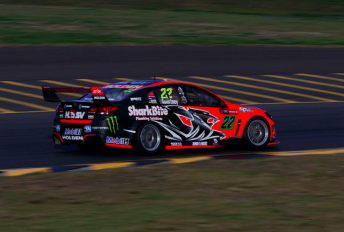 James Courtney paid tribute to the resilience of his Holden Racing Team crew after taking a podium finish in the opening race at Sydney Motorsport Park.

The Sydney event comes just over a week since Holden announced that it would end its 27-year factory backing of Walkinshaw Racing at season’s end.

Despite the unsettling build-up, the HRT has shown genuine signs of progress this weekend on the type of flowing circuit at which it has particularly struggled in recent seasons.

Courtney drove from fifth to third in today’s 120km race, deftly overtaking Scott Pye and Chaz Mostert in one move during the early stages before holding the place to the finish.

The former champion emphasised the team work required to secure the result in a race that saw pitstop timing and tyre conservation play a critical part in the result.

“It’s been a bit of a hairy time for us at HRT over the last ten days,” acknowledged Courtney post-race.

“The guys did a great job with strategy and also with the stop obviously – we got in and out in front of Prodrive (Mostert).

“We legitimately got past them and kept him behind me all day, so it was a great tribute to the guys in our team.

“Robbie (Starr, engineer) did a great job on the radio… no one really knew how hard to push so there was a lot of communication backwards and forwards, probably the most throughout the whole year.

“It was a great team effort and I’m happy to finish on the podium.”

Courtney, whose own future with the squad beyond this year remains uncertain, stressed that morale in the team had not dipped following Holden’s decision.

“They weren’t in the corner crying… we’re all big boys,” he said when asked of the mood within the camp upon arrival at the Sydney event.

“In the end Holden has been a sponsor of the team for a very long period of time, but unfortunately it’s business.

“We’re all grown ups, we’re not kids. We can all accept the fact that as a company Holden has decided to go in a different direction.

“We’ve just got to make sure we can put someone else in place and press on.”

Today’s result marked the HRT’s second podium in the last 16 races and Courtney’s first ever at Sydney Motorsport Park.

Courtney missed all three races at the circuit last year after suffering fractured ribs in a pitlane incident caused by a low flying Navy helicopter.

“It’s a track that hasn’t been great for us over the last few years at HRT,” said Courtney, who grew up in nearby Penrith.

“This weekend the car is quite good in the long, high speed corners.

“It’s very different to what we had when we were at Phillip Island.

“It’s a lot more predictable and balanced. It’s not changing its mind 37 times before you get to the apex.

“It’s that consistency through the corner that we’re getting on top of that makes it so much easier.”