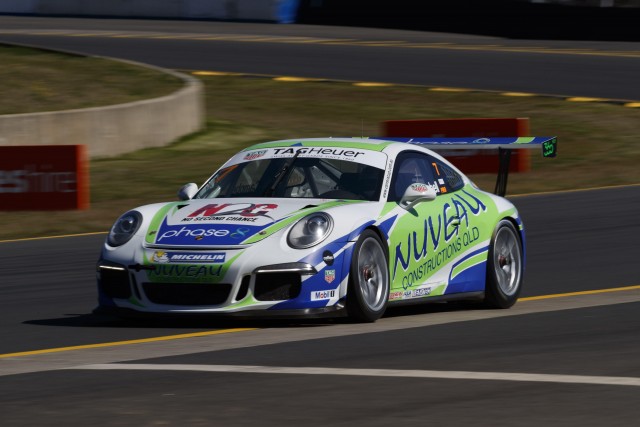 Matt Campbell has taken a lights-to-flag victory to continue his domination of the Carrera Cup Australia at Sydney Motorsport Park.

After taking both races at the Rennsport Festival back in May, Campbell was never headed in the opening race this weekend, easily controlling proceedings from the front.

A swift getaway off the start set-up the victory, while behind David Wall and Nick McBride settled in behind.

Over the opening laps Campbell stretched a handy lead as Ash Walsh spun while sitting in fifth place. He would drop down to 15th before recovering for a 11th place finish.

Steve Richards and Alex Davison enjoyed a healthy battle for fifth place, with Richards getting through on lap #9 of #16.

As the laps wound down the battle for second heated up with Wall having to hold off a fast finishing McBride and Dean Fiore.

No such issues for Campbell who has now extended his lead at the head of the championship fight.

A great battle was also underway in the Tag Heuer Carrera Challenge, with rivals Stephen Grove and Tony Bates fighting for position over the closing laps.

It went down to the final corners, with Grove keeping his nerve to take the victory in the semi-professional category.

Carrera Cup Australia has one more championship race tomorrow, before combing with Carrera Cup Asia for two separate races for the Challenge drivers and then the professionals.

VIDEO: Campbell and Grove speak after the opening race in Sydney