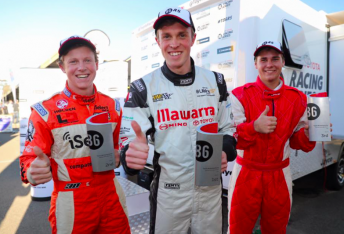 Hill jumped well from pole position and drove away to a three-second victory in the nine-lap journey.

Will Brown made his way from fourth to second by the halfway mark, but was never a threat to Hill, who swept the season opener at Winton.

Aaron Seton finished third after initially dropping a position to sixth off the start.

Seton quickly recovered before going on to pass David Sieders for third with two laps remaining.

The third-generation racer dived inside Sieders at Turn 2, and managed to successfully round up the V8 Utes series leader despite the pair touching through Turn 3.

The encounter provided plenty of incident further down the field.

Drew Ridge spun himself out at the fast Turn 1 while attempting to pass and then avoid Ben Grice, who swerved across the track on Lap 3.

Several cars darted to the grass somehow avoiding a monumental accident in the ensuing dust cloud.

Jon McCorkindale and Adam Gowans, however, were not so lucky three laps later at Turn 6.

McCorkindale had got loose attempting to pass Jake Klein, and with Dean Canto just behind and unable to avoid contact, car #69 was turned into a spin.

Gowans then arrived on the scene and couldn’t clear McCorkindale, instead making violent contact with the Dial Before You Dig entry, which took both cars out of the running.

Both made their way off the track, avoiding the need for a Safety Car intervention and allowing Hill to a romp to a fourth race win from four.

Earlier in qualifying, Frank Mezzatesta’s weekend came to an untimely end when he made heavy contact with the wall on the run to the final corners.