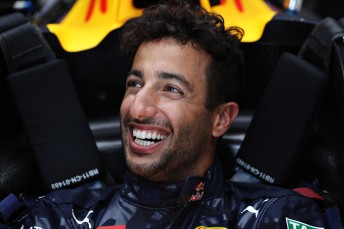 Daniel Ricciardo will test the Halo cockpit protection device in Friday practice ahead of this weekend’s Belgian Grand Prix.

The Red Bull racer will join a group of drivers set to complete installation lap runs with the concept attached to their cars in opening practice at Spa-Francorchamps.

The FIA has been keen to conduct further testing of Halo during race weekends after teams voted against its introduction for the 2017 season.

The Australian heads to Spa confident Red Bull can take the fight to both Mercedes and Ferrari following a strong run of form prior to the mid-season break.

Ricciardo managed to split the Mercedes duo to finish second last time out at the German Grand Prix.

This weekend sees the 27-year-old return to the circuit which brought him his last race win in 2014.

“We are prepared to hopefully be in a fight with Mercedes, but also prepared that Ferrari might join in on the action as well,” said Ricciardo.

“This is going to be an interesting weekend, but I do think, if I am happy with the car then we will be very competitive.

“However, I don’t want to forget Ferrari. They are going to still be there.

“We’ve got the upper hand on them in the last few races, but there will still be some races where they turn it on as well.”