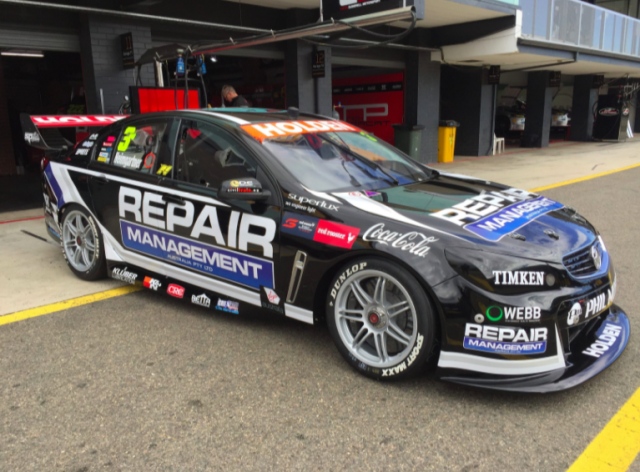 Both LDM Holdens will run in RMA livery this weekend

Phil Munday’s Repair Management Australia will return as the primary sponsor of Lucas Dumbrell Motorsport in Sydney this weekend.

A long-time LDM backer, all RMA branding had been absent from the cars over the last two events.

The LDM Holdens ran in plain black at Townsville and Queensland Raceway after a deal with Freechoice Tobacco fell apart.

Munday is also expected to play a business advisory role within the team as part of the new arrangement.

Changes at LDM in the lead-up to Sydney saw team manager Barry Hay let go by the team last week.

The squad had already operated without Hay for much of Townsville and the entire Ipswich weekend after he was hospitalised with pneumonia.

After a shocking run across recent meetings Percat is hopeful that work during the break will yield results.

“It’s great to have Phil on board for this round, hopefully we can bring home some decent results for him and the team,” he said.

“Last year we finished inside the top 10 on Sundays race in wet conditions, so hopefully we can have some good car speed again this weekend.

“We elected not to test during this break as there was quite a bit of work to be done on the cars.

“My car has been back on the chassis jig, with works been completed to the rear suspension points.

“The boys are in full swing and the cars are the best prepared that they have been all year, so it’s really encouraging.

“I’m really hoping to have a good, clean weekend whilst hoping to get some speed out of the car and get some more points on the board.”

LDM started the season with primary sponsorship from SP Tools before running several events in the colours of Abro.