Mustang ‘no chance’ for 2017 Supercars grid

Mustang ‘no chance’ for 2017 Supercars grid 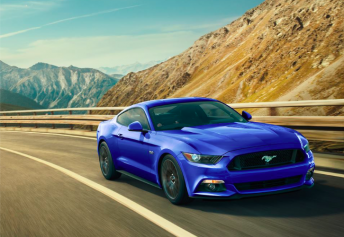 Prodrive boss Tim Edwards has categorically ruled out any chance of running a Ford Mustang in the Supercars Championship next season.

News Ltd newspapers reported this morning that the Melbourne-based outfit is “almost certain” to introduce the car to the category next year, coinciding with the new Gen2 rule platform allowing two-door models.

Moves from Prodrive to establish a road car business that will sell aftermarket performance packages for Mustangs had triggered the speculation.

Although maintaining a frequently repeated stance that Prodrive would like to see a Mustang racing in Supercars, Edwards laughed off the suggestion that it will happen as soon as next year.

The team currently runs four Falcons FG Xs without funding from Ford, which pulled out of the category at the end of 2015.

“Absolutely, 100 percent no chance,” Edwards told Speedcafe.com when asked of racing the Mustang in 2017.

“We’ve said many times that a Mustang is something we’d look at long term, but it’s not even being entertained at the moment.

“We’re not looking at it or doing any work on it.

“There’s been a few emotional statements that we’d love to race a Mustang, but that’s not a factual comment.

“It would be totally impossible to do it now anyway. The time has passed for anyone to be changing for 2017.

“We’ve got a good package that we know and understand. That’s what we’ll be racing next year.”

Although Supercars’ keenness to see the Mustang on the grid has been well documented, Edwards says that his team has only undertaken a very brief assessment of the body’s suitability to the control chassis.

“We don’t have any CAD of the car or anything.”

Edwards meanwhile acknowledged that work is advanced on a road car program, confirming that it has recently registered the Tickford brand as one of a number of options for the business.

Although linking a racing platform with its road car business is logical, the low margin and highly competitive aftermarket segment is thought unlikely to yield significant funds for a Supercars effort.

The success of the new Mustang road car has seen a multitude of aftermarket tuners offering parts packages, including several that act as outlets for US-sourced Ford Performance parts.

Edwards stressed that Prodrive is not angling for official Ford Australia backing for its road car business, which will not just focus on Mustangs.

“We’re a long way down the track on it (the road car business) but we’re still shaping it into what we want it to be,” he said.

“There are so many people playing in that space, we’ve got to be careful what we take on.”

Despite ongoing optimism that a Mustang will eventually make the Supercars grid, Edwards downplayed suggestions that it could be done without the manufacturer.

Ford Australia has remained staunchly against involvement in the category, with even the American contacts of DJR Team Penske owner Roger Penske unable to change the company’s local marketing direction.

Like Prodrive, DJR Team Penske has stated that it will continue with its Falcons next year as Penske plays a patient game with a manufacturer that it is closely tied to through NASCAR.

“It would be hard doing a program without some kind of blessing from the manufacturer,” admitted Edwards.

“Nothing is impossible, but if anyone was going to go down that road I think you’d want the manufacturer’s blessing.”