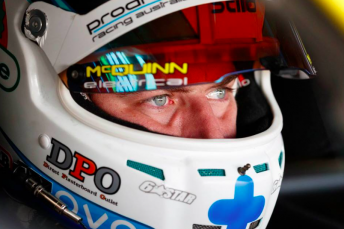 Rain arrived at the Western Sydney venue with five minutes of the hour long run remaining, ensuring there’d be no late improvers.

Mostert was one of several to perform initial balance checks on hard tyres before switching to the soft.

The Supercheap Ford went to the top of the order with 1:30.33s just past the halfway mark, knocking previous fast-man Michael Caruso to second.

This weekend marks 12 months since Mostert’s last race win, which came amid a hot streak of form for the youngster prior to his Bathurst crash.

Largely struggling for race pace during the season to date, Mostert is optimistic that developments trialled at a recent test day have helped sharpen his Falcon.

“It’s a good confidence builder,” he said of topping the session.

“The car felt pretty good, (but) I still think we need to work on a few little things with the car.

“It’s hard to get a full read on it at the moment, but it feels like it turns a bit better which is something we’ve been working on.

“The whole weekend is a big test for us to see if some of our new components work.”

Karl Reindler also shared the Team 18 Holden with Lee Holdsworth, whose brief run followed his return to the cockpit during a shakedown at Winton on Monday.

“I felt quite comfortable but it was a bit hard because the car had no grip,” said Holdsworth as he works up to a race return at Sandown next month.

“I was going to ask Karl if he’d done burnouts on the way in!

“It was good to at least get back in and feel what the new car feels like again.

“I asked if I could have another set of tyres to get a bit more running but Karl was pretty keen to get back out there again.”