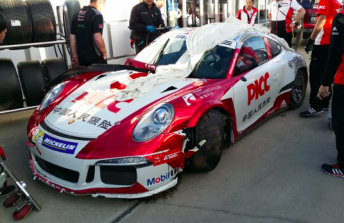 Maxime Jousse secured pole for both of the category’s first two races in Australia, but it was Menzel who headlined the day’s proceedings after his final-minute incident.

The German, driving for Team StarChase, was attempting to round up the slow-moving Xi Wang at Turn 3 when he made contact with the left-front corner of the Chinese driver’s car and rolled across the grass.

“It’s just a situation, so you can’t really say what was wrong there,” shrugged Menzel, who is a narrow second in the championship standings to Jousse.

“He just touched me and I rolled, so it’s the only thing I can say.”

While the roofline was largely untouched, car #199 appeared to suffer significant chassis damage and may not take the grid for the weekend’s two championship races.

“It looks quite big, so I don’t think we can save this car,” added the son of German sportscar ace Christian Menzel.

The session finished under green flag due to the lateness of the incident, though it had been interrupted 10 minutes in when Wang spun at Corporate Hill.

The Frenchman looked set to lower his own benchmark again but traffic and then a minor error of his own denied an improvement.

Nevertheless, the championship leader had done enough to secure pole position for each of Saturday’s two races.

The starting grids are determined by each drivers’ fastest and second-fastest times respectively.

The top five on the grid is completed by Malaysian-based Australian Mitchell Gilbert, Austrian Martin Ragginer, Singaporean Tang, and Menzel, pending the repair of his car.

The first of those 16-lap encounters will be run from 1445 AEST tomorrow, with the second on Sunday.

An ‘invitational’ race for each of the Pro and Challenge classes to be contested by both Carrera Cup Asia drivers and their Australian counterparts will complete the weekend.