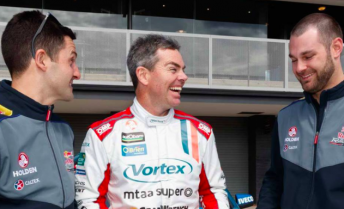 Lowndes with Whincup and Van Gisbergen

Craig Lowndes has declared his desire to race on beyond his current contract with Triple Eight and debut the team’s new Holden Commodore.

The 42-year-old was switched into the team’s new third entry this season as part of a fresh two-year contract with the Queensland-based squad.

Holden announced a deal with Triple Eight last week that will see the team develop a new car next year ahead of its debut in 2018.

Lowndes is eager to be a part of the next era, which is expected to include the introduction of a V6 turbo engine, but stresses that his form will ultimately dictate his future.

Team-mates Jamie Whincup and Shane van Gisbergen, who joined the squad this year, are both contracted through to the end of 2018.

“When we put pen to paper on the current contract next year was going to be the first year of the next generation car, but it’s been blown out by 12 months,” Lowndes told Speedcafe.com ahead of his 600th Supercars Championship start on Sunday.

“It’d be nice to be a part of that generation change and no doubt next year as we see the cars get developed and get built that we’ll be part of that side of it.

“If we can stay in the top five or six of the championship… I’d love to be in the top two or three, but the way the competition is we’ve got to be realistic, we’re not getting any younger.

“It’ll be a matter of what Roland (Dane, team owner) wants to do at the time. To make that argument stronger we’ve got to keep performing the way we are.”

While the new car won’t debut until 2018, Triple Eight’s new Holden deal sees the team take over the Holden Racing Team branding from Walkinshaw next year.

Although it will only be applied directly to the two Red Bull cars, Lowndes – who spent seven years at HRT from his enduro debut in 1994 – says he’s excited about the change.

“To be part of the factory team again next year will be great,” he said.

“We had some great memories with HRT in the early years, hopefully we can continue that on from next year.”