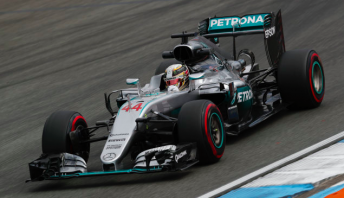 Lewis Hamilton has been hit with a 15-place grid penalty after undergoing an engine change at this weekend’s Belgian Grand Prix.

Mercedes has fitted a new power unit to Hamilton’s car along with a sixth MGU-H and turbocharger for the season, which has triggered the 15-place penalty.

Under the FIA regulations, each driver is issued with an allocation of five engines and power unit components for the season.

The first time a sixth engine component is installed incurs a 10-place grid penalty, followed by a further five-place drop if other components are changed.

The reigning world champion was expecting to take a grid drop this weekend having suffered several engine issues earlier this season.

However, Hamilton’s penalty is likely to increase with Mercedes considering further engine changes before Practice 2 and Practice 3 in a bid to bring more components into the Brit’s pool for the rest of the campaign.

Such a move would lead to further penalties and see Hamilton start Sunday’s race from the rear of the grid.

Mercedes has also elected to fit a new engine to Nico Rosberg’s car which is the fourth of his five unit allocation.

Rosberg went on to top opening practice at Spa-Francorchamps with a comfortable 0.7s margin over team-mate Hamilton, while Kimi Raikkonen was third for Ferrari.

The Swiss squad has utilised its final internal combustion engine for the season, but crucially a sixth turbocharger.