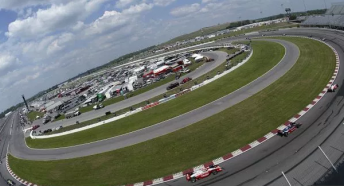 Gateway will return after a 14-year absence. pic: NBC Sports

The Verizon IndyCar Series has confirmed the revival of Gateway in St Louis to the calendar after a 14-year absence with the disclosure of the 2017 schedule.

While Watkins Glen returns after a six-year absence from September 1-3, it was unexpected after coming in to replace the failed Boston race.

IndyCar has since negotiated a multi-year agreement with the New York state circuit starting from next year.

The return of Gateway Motorsports Park comes after key upgrades to the 2km oval under new owner Curtis Francois.

“Today is a monumental day for the people of the St. Louis region,” Francois said.

“I am proud of the progress we’ve made at my hometown track. I knew someday we would be making an announcement like this because I have such confidence in the people of this region and their commitment to great sporting events.

“More than a dozen track operators around the country sought this IndyCar race for their communities.”

Formerly called Gateway International Raceway, the venue hosted CART races from 1997 to 2001 before the rival Indy Racing League ran from 2001 to 2003.

Of  the existing drivers, Penske stars Helio Castroneves and Juan Montoya recorded wins at Gateway in 2003 and 2000 respectively while Chip Ganassi’s Scott Dixon and Tony Kanaan are the only others in the current field to have raced at the Illinois venue.

Castroneves said: “Personally, I like it because I’ve had success there but also that I used to race for Hogan (a St. Louis-based IndyCar team in 1999), which makes it a special place to me.

“I won there with Team Penske in 2003 and there was an all-Brazilian podium with Tony (Kanaan) and Gil (de Ferran).”

IndyCar chief executive Mark Miles said while the 2017 schedule focussed on continuity the return to the St Louis market is integral to the category’s growth.

“The addition of Gateway Motorsports Park and the return of Watkins Glen International are integral to the continued growth of IndyCar,” Miles said.

“Gateway officials have been enthusiastic about the prospect of hosting a Verizon IndyCar Series event for some time and we’re excited to bring the series to the St. Louis market.

“Watkins Glen is an iconic American road course that is revered by our fans, drivers and teams. Our goal from the beginning was to establish a long-term agreement and we’re thrilled that we’ve been able to extend this relationship for the future.”

IndyCar is attempting to maintain its revival which has seen TV audiences grow and record crowds attend six of the first 11 events in 2016.

The series has seen a steady upward swing in television ratings which is up seven percent year-to-date following a 38 percent jump from 2013-2015.

IndyCar will begin for a sixth successive season on the St Petersburg street track in Florida on March 12 while the finale will return to Sonoma on September 17.