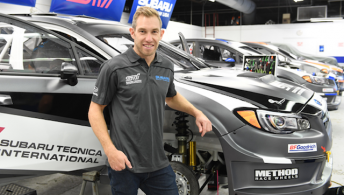 Former WRC factory driver Chris Atkinson will make a shock return to competition for Subaru in Round 9 of the Red Bull Global Rallycross Championship this weekend.

Atkinson will run in the Subaru Rally Team USA outfit alongside Sverre Isachsen and Bucky Lasek at the Atlantic City event.

The breakthrough sees Atkinson reform ties with Subaru whom he drove for from 2005-2008 in the World Rally Championship.

With a total of 77 WRC starts highlighted by 41 special stage wins and six podiums, Atkinson last competed at the top level when Hyundai offered him two starts in the World Rally Championship in 2014.

While instrumental in helping Hyundai develop its i20 for a return to the WRC, Atkinson had missed out on securing a full-time drive with the Korean giant, leaving his career in limbo.

The Atlantic City round will be Atkinson’s maiden Rallycross event.

“It’s impressive to see how much the car has evolved since I last saw the guys,” Atkinson said.

“They’ve come a long way since I first saw the guys 10 years ago,” commented Atkinson.

“Everyone is really motivated to succeed and to improve. I’m really excited to be part of the team.

“It’s great to see everyone working hard and I’ll do my part, and look forward to pushing for a good result.”

Atkinson undertook recent test in the 2017 Subaru WRX STI GRC car and worked with the team to further develop the chassis.

“That was my biggest impression on the car. The rest is quite similar to a rally car in terms of handling and dynamics so I got used to it pretty quickly.”