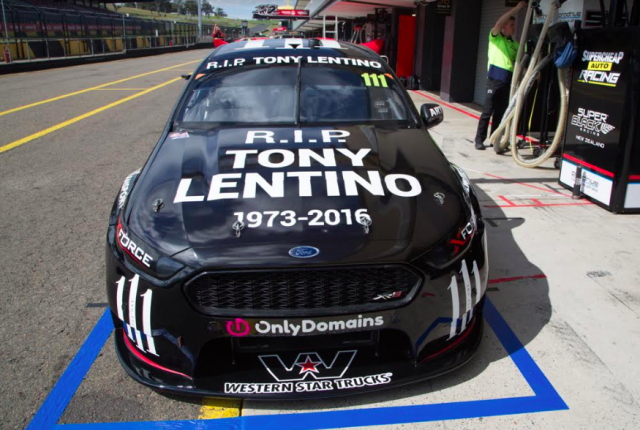 The #111 Ford’s bonnet and boot are sporting ‘R.I.P. Tony Lentino’ signage after the 42-year-old lost his battle with cancer on July 25.

Pither, who attended Lentino’s funeral in Albany, New Zealand at the end of last month, is eager to see the Prodrive-run team continue its promising form.

“It’s been a little while now since Tony passed, but being the first race since it happened we wanted to run a tribute on the car,” Pither told Speedcafe.com.

“At the end of the day what he’d want the most is for us to get out there this weekend and get good results. That’s what everyone here is pushing for.

“If we can carry on what we did at QR, apply the same mindset and processes that we had there then I think there’s no reason why we can’t keep that momentum going.”

Prodrive is understood to have the first option to buy the #111 Racing Entitlements Contract, which was purchased by Lentino at the end of last year.

Pither’s Ice Break funding is thought to only be half of that required to run the car, with Super Black and other sponsors topping up the remainder.

“I’m hoping we can just carry on as we are,” Pither said when asked of next year.

“At the end of the day I think for me the last few rounds have been much better, I’ve been very happy with the way things have been progressing.

“If it was to not continue it’d be disappointing because we have the opportunity to back up what we’ve learnt with a familiar surrounding.

“Ice Break has indicated that they want to stay on as well, they’ve been pleased with how it’s all working.

“We’ll try and finalise all that over the next little while and hopefully we can continue.

“If it doesn’t I’ll have to look and see what other opportunities are out there.”