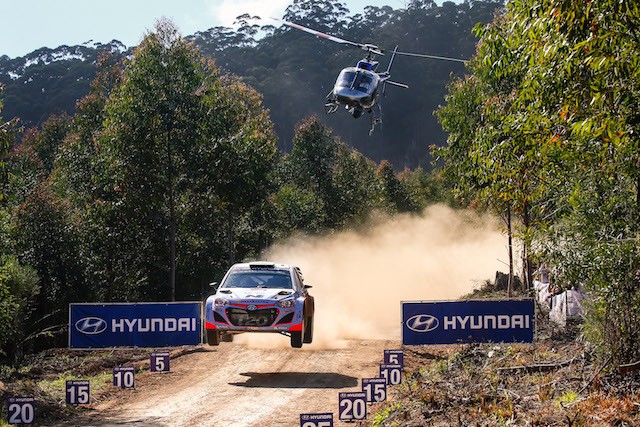 Rally Australia is involved in negotiations with the FIA to retain its final round berth on the 2017 World Rally Championship calendar.

The Coffs Harbour event secured the November 17-20 season finale for this year’s championship, having run in September in previous years.

Organisers are firmly pushing to keep the spot on next year’s calendar but are expected to face stiff opposition.

In the midst of trying to retain its position as the final round, Rally Australia continues to push for an extension to its agreement to run on the WRC calendar which expires at the end of 2017.

A proposal to secure another three-year deal was submitted to the FIA earlier this season.

Great Britain is believed to be among the contenders having previously hosted the final round nine times in the last 10 seasons.

Rally Australia is expected to learn its fate next month when the FIA finalises the 2017 WRC calendar at a meeting of the World Motor Sport Council.

Event chairman Ben Rainsford says Rally Australia’s bid has been clearly outlined to the FIA and is optimistic about retaining the final round.

“We have been lobbying very hard and pushing the strengths that Australia has,” Rainsford told Speedcafe.com

“The event is in the Australian summer and we have the gala at the end of the year along with the new Super Special stages.

“The European winter is nowhere near as fun as the Australian summer.

“It is a long way for teams to come to compete so we have to reward them with a bit of a holiday. The only way we can do that is if we are the final round of the championship.

“I don’t think Australia is the spiritual home of rallying, but it has enough good things to showcase to be the final round.”

Rainsford believes the event has found a strong location on the Coffs Coast, which made its WRC debut in 2011 and has held a rally annually since 2013 after initially rotating with New Zealand.

However, he does admit Rally Australia will face competition from other locations in the Asia-Pacific region, including Japan, Korea and New Zealand.

The prospect of Rally New Zealand making a comeback for the first time since 2012 has gained traction on the back of the success of Hyundai Kiwi factory driver Hayden Paddon.

“I have no objections in seeing both Australia and New Zealand on the calendar (in the future) but I think the teams would,” Rainsford commented.

“If they (WRC) wanted to have more than two events in the Asia-Pacific region then I think they would be pushing towards Korea and Japan rather than New Zealand.”

Indeed Hyundai’s recent WRC rise and Toyota’s long awaited comeback as a factory team next year could spark bids from Korea and Japan from 2018.

“We are just trying to work out a position that works for us and the promoter, but ultimately the decision (for 2018-2020) is up to the FIA,” added Rainsford.

“We are happy at Coffs Harbour. We would like to have a metropolis grow around the event here.

“We have got the ingredients to do that with it being the last round and not clashing with Supercars, and we have got the new Super Special stages too.”

Next year’s event will also see the more aggressive and faster specification WRC cars hit the Coffs Harbour stages for the first time.