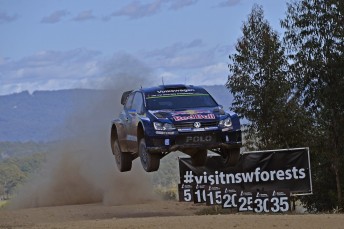 Rally Australia has announced a new free-to-air television broadcast deal which will see this year’s final round of the World Rally Championship move to the Nine Network.

Revealed at the launch of the November 17-20 Coffs Harbour event today, rally organisers have secured a new and improved package that takes over from its previous deal with Network Ten.

Although full details of the arrangement and the make-up of the broadcast team is yet to be confirmed, at least three stages will be shown live on Nine.

They will include include the first run of a new Super Special stage constructed at the Coffs Harbour Jetty on Friday November 18.

The arena stage, which features a spectacular jump and a motocross-style berm corner, is due to be run on Friday and Saturday.

The two passes through the Wedding Bells stage on Sunday including the final run, which acts as the Power Stage, will also be shown live as per all events in the WRC.

In conjunction with live coverage, Nine will host 60 minute preview and review shows alongside three 30 minute daily highlights packages throughout the event.

Foxtel will continue to broadcast the event live as part of its ongoing arrangement with the WRC.

Rally Australia chairman Ben Rainsford says the new deal will be a huge boost for the sport in the country. Nine has previously televised the WRC when Rally Australia was located in Perth.

“Channel Nine have a reputation of hosting international sporting events when they had the Formula 1 and previously had the World Rally Championship,” Rainsford told Speedcafe.com.

“We will fit in nicely there. They have got some good talent and a good audience.

“We have only just finalised the deal and over the next three weeks the guys will fill in the details of what where and when.

“We are very excited about it as there are good ingredients there.”

Alongside the introduction of new Super Special stages on the Coffs Harbour waterfront and the new 1.37km Raleigh Super Special Stage held at a multi-purpose motorsports facility 20 kilometres south of Coffs Harbour, a number of minor tweaks have been made to other stages.

“There have been some modifications made due to the weather,” added Rainsford.

“We have added a loop to one of the stages to give the punters two sightings of the cars.

“This is going to require some additional work but it will be great for the fans.”

Meanwhile, fears over the criticism received following last year’s evening stage have also been allayed following the rally’s switch of dates from September to November.

Drivers labelled the Valla stage as dangerous due to dust kicked up by competitors hanging in the night air.

This year the stage will remain but will no longer be run in darkness with daylight saving ensuring it will be lighter for longer in November.

“I appreciate some drivers were critical of it,” said Rainsford.

“We took advice from the FIA about the dust and the stage was good to run.

“This year it is not going to be an issue because of daylight savings and I think that will take away a lot of the issue with the dust.”

A special gala reviewing the 2016 World Rally Championship is also planned for Sydney at a yet to be confirmed location on the Monday after the rally.

The event will see all the WRC teams and drivers attend to witness the championship prize giving.

A group of interactive awards will be launched at the gala which will be voted on by fans.