A total of 44 Porsche Carrera Cup cars are set to do battle at Sydney Motorsport Park this weekend with the debut of the Asian championship on Australian soil.

Carrera Cup Asia’s inclusion on the Sydney Supercars support bill is the first of what is hoped will become a regular tie-up between the Asian and Australian Porsche classes.

The 24 Asian entries have arrived in Australia via 18 sea freight containers in a major logistical effort from championship organisers Porsche China.

They will be dispatched by airfreight following the event in order to ensure the cars are ready for their next round supporting the Singapore Formula 1 Grand Prix on September 16-18.

Porsche China motorsport manager Alex Gibot, who is in charge of the Asian championship, says that this weekend is an exciting moment for the category.

It follows a similar double-header with the Asian and Japanese Carrera Cups at Fuji Speedway in June.

“It is important for us to come to Sydney because in Asia we are still working on motorsport – the market is not yet mature like it is in Australia,” Gibot told Speedcafe.com.

“We can show our drivers what the racing in Australia is like. It’s a different way to operate and rich in experience, racing alongside the V8 Supercars.

“The second purpose, more generally, is to show the strength of the Carrera Cup concept worldwide.

“Everything is based on the same car, the 911 GT3 Cup, which means that wherever you are you can race. It’s a unique model that we have.”

Although boasting identical cars, the Asia championship runs to a different format to that seen in Australia. 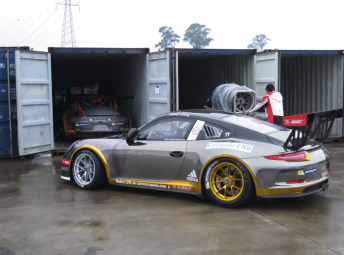 The CC Asia containers travel 25,000km during the season

Starting in 2003, all entries were initially prepared by the one outfit – EKS Motorsports – before individual teams were permitted six years ago.

Logistics however remain centrally controlled, with teams only receiving their cars from Porsche’s containers once they arrive at each race meeting.

The championship puts a strong emphasis on off-track amenities and networking for its amateur drivers, which make up 16 of its 24 car field.

This weekend’s event will see the two championships run their own pair of standalone points races before coming together for two combined showcases.

The combined heats split competitors along the lines of Pro and Challenge classes, giving the latter a rare opportunity to fight it out for a race win.

As an incentive to ensure that all cars take part, drivers will earn 10 points towards their respective championships in the combined races.

Whether the Asian runners can hold their own against the Australians on home soil remains to be seen.

The Asian championship is currently being led by 25-year-old Frenchman Maxime Jousse, who splits his time between Carrera Cup and the Blancpain Series.

Austrian Martin Ragginer, who missed the opening three rounds of the season, is also expected to be among the quickest of the visitors.

“The level will be highly competitive, but it is very difficult to say how it will work out,” said Gibot of the battle between the front-running Pros.

“I hope that the Asian drivers will show that we have some good guys too.

“But on paper, for sure, the track knowledge suggests the Australians will be a bit more competitive.” 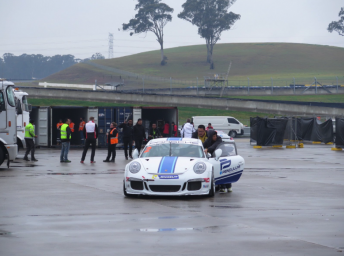 Wet weather greeted competitors as they set up at SMP

Carrera Cup Asia’s amateur drivers will meanwhile have an extra incentive to excel this weekend thanks to a prize linking the event with the result of June’s Fuji meeting.

The top points scorer from Class B in Carrera Cup Asia across the two events will be awarded a fully funded seat in Carrera Cup Japan’s Suzuka Formula 1 support race in October.

Although dismissing any suggestion of eventually expanding to a full Asia-Pacific series, Gibot says that such invitations help grow all three existing championships.

“In the future we would like to do more and more of this kind of exchange,” affirmed Gibot of the prize.

“We are in the same part of the world and together we have a very big platform.

“I think it’s something that will help grow the Carrera Cups in all three markets.”