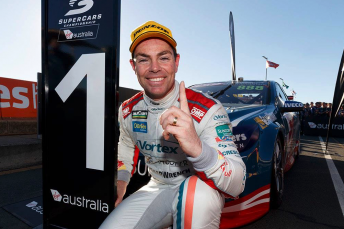 Craig Lowndes’ trademark smile will brighten the spectator areas at Sydney Motorsport Park this Sunday as the category celebrates the veteran’s latest milestone.

Supercars is set to mark the driver’s 600th championship race start by handing out 5,000 Lowndes face masks to fans who attend the circuit.

Championship organisers will also make a presentation to Lowndes in front of media in the pitlane on Thursday.

Lowndes, who surpassed Russell Ingall’s 250 round starts milestone at the Clipsal 500 this year, will be the first driver to reach 600 race starts.

The latest landmark arrives 20 years after a then 21-year-old Lowndes won on debut in the Australian Touring Car Championship at the Western Sydney venue.

Although without a championship win since the third of his titles with the Holden Racing Team in 1999, Lowndes remains by far the most popular driver among fans.

His legend status was enhanced last year when he became the first drive to crack 100 ATCC/Supercars Championship race wins before taking out a sixth Supercheap Auto Bathurst 1000.

Subsequent success sees Lowndes head to SMP with 105 wins from 598 starts for a strike rate of 17.5 percent.

Supercars CEO James Warburton, who presented Lowndes with a gold helmet upon his 100th win last year, paid further tribute to the 42-year-old ahead of the weekend.

“Craig is one of the greats of Australian sport and is still one of our most competitive drivers,” said Warburton.

“He is also a fantastic ambassador for the sport and our modern day Peter Brock.”

Lowndes’ Triple Eight team may have a double reason to celebrate this weekend as Jamie Whincup continues to aim at a 100th win.

The six-time champion scored his 99th victory at Townsville last month before being narrowly denied more success last time out in Ipswich.