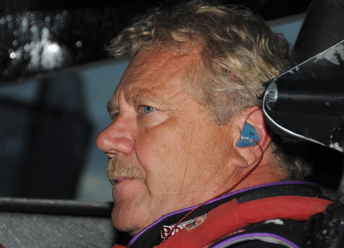 Steve Kinser is to retire from his phenomenal Sprintcar career

Steve Kinser, the most successful Sprintcar driver in history, has run his final lap after announcing his retirement at Lebanon Valley Speedway in New York State.

Indiana-native Kinser, 62, leaves an incredible legacy with 577 World of Outlaws Feature wins, 20 Outlaws Championships and 12 Knoxville Nationals Championships – more than any other driver.

News of his retirement came during the All Star Circuit of Champions meeting where, ironically, one of his fiercest rivals Sammy Swindell won from Kinser’s son Kraig.

The official Twitter account of Kinser confirmed the King of the Outlaws was about to complete his last laps Monday night US-time by tweeting “Help Salute ‘The King’ as he takes his final laps… Use hashtag #KingKinser to bid farewell to the greatest to hold the wheel.”

Kinser’s team boss and owner of the All Star Series, Tony Stewart was on hand at Lebanon Valley and warmly greeted Kinser after his announcement.

For the best part of 40 years, Kinser has been at the pinnacle  of Sprintcar racing, taking 876 Sprintcar feature wins around the world and he has been the driver that has inspired hundreds of young racers across three generations throughout North America, Australia and New Zealand.

In addition to his exploits at Knoxville and as a foundation competitor in the World of Outlaws Series, he has seven King’s Royal victories and 12 Gold Cup wins on his CV.

In 1987, he amassed an astonishing 44 feature race wins of the 67 Outlaws events, securing a string of 12 race wins in succession and winning 24 of the last 26 races on the tour. 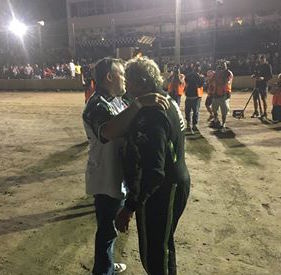 Kinser was one of the famed drivers from various disciplines featured in the International Race of Champions (IROC) Series, starring seven times and he taking a race win at Talladega in 1994.

Kinser attempted to qualify for nine NASCAR premier Series events – two in 1993 and then seven in 1995. He didn’t strike fortune in ‘93, however driving in a car owned by NHRA legend, Kenny Bernstein qualified for five NASCAR events in 1995, including the Daytona 500 where he finished 40th. His best result was 27th at Rockingham, North Carolina.

He would head to the Indianapolis Motor Speedway with long time sponsor, Quaker State and finish 14th in the 1997 Indianapolis 500, his only IndyCar start.

Kinser was very much one of the pioneering drivers of the Sprintcar era in Australia, becoming a regular feature on Australian clayways throughout the 1980s and 1990s with support from the likes of JPS and Commodore cigarettes – the liveries becoming iconic pieces of Australian motorsport history.

In 1986, he turned his hand to a Speedcar at Western Sydney’s Liverpool Raceway and promptly won the prestigious Australian Speedcar Grand Prix. 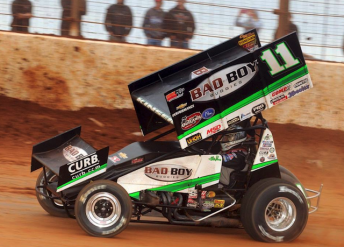 He would win his 22nd and final race at Valvoline Raceway in Sydney in 2013 in typical Kinser fashion. That would see him remain 12th on the overall feature race winners list at the Granville speedway. He would also take a number of World Series Sprintcars wins

One of the grandest honours bestowed on the undisputed King of Sprintcar racing was being rated among the 25 greatest drivers of all time in an ESPN.com peer voted poll alongside the likes of Mario Andretti, Nigel Mansell, Ayrton Senna, Don Garlits, Emerson Fittipaldi and Michael Schumacher, being declared the ‘Michael Jordan of Sprintcar racing.’

Whilst stepping back from the full-time rigours of racing over recent years, his son Kraig Kinser is still racing a heavy Sprintcar schedule each season.

The retirement of Kinser has brought an end to a career unlikely to be matched in the discipline again.