Charlie Schwerkolt has declared his commitment to retaining Lee Holdsworth for 2017 as the driver prepares to return from injury.

Although a new deal is yet to be formally signed, both Schwerkolt and Holdsworth have affirmed to Speedcafe.com that their partnership will continue next season.

The news comes as Holdsworth prepares for his return to racing at next month’s Wilson Security Sandown 500 after sustaining significant injuries in a crash at Hidden Valley in June.

“We’ve just got to put the ink to paper with Lee,” Schwerkolt told Speedcafe.com, ruling his team out of the swirling silly season.

“The plan was to sign up just after Darwin, but obviously the priorities changed there.

“But we’ll sit down at some stage and get it sorted for next year and beyond.

A fresh contract with Schwerkolt’s Team 18 will provide a rare piece of continuity for Holdsworth, whose career has taken a series of dramatic twists and turns over recent years.

Initially announced as staying with Erebus for 2015, Holdsworth eventually signed a deal with Schwerkolt, who had an ongoing contract for his entry to be run by Prodrive.

Schwerkolt’s 11th hour switch to Walkinshaw saw the duo spend a single season running as a fourth car out of Clayton before the forklift magnate moved to set up his own operation for this year.

Encouraged by progress made with the single-car squad prior to his Hidden Valley accident, Holdsworth says he’s eager to take Team 18 to the front. 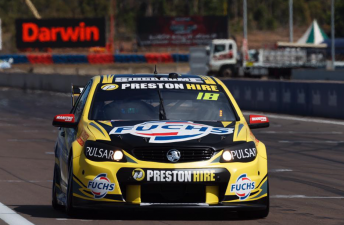 “It’s hard work when you start a new team, especially one that’s started from scratch,” he said.

“I’ve put in a lot of effort to get the team to where it is and want to reap the benefits of it.

“We were building before Darwin and that has been a backwards step, but I feel like we’ll take off from there when I get back driving.

“We’re on the same page with everything (about 2017), we’ve just got to sit down and sign off on it.

“We both know where we stand. It’s just something that will happen over time.

“Charlie has done a great job of securing sponsorship for next year, so it’s all ready to go.

“We’re in a good position to roll on with some continuity into 2017.”

Although destroying a car at Hidden Valley proved a major financial hit in Team 18’s first season, Schwerkolt says that Holdsworth’s absence has been a far bigger setback than any financial burden.

Holdsworth returned to the wheel for the first time since the accident at a shakedown on Monday and is set to enjoy further seat time in practice at Sydney Motorsport Park this weekend.

“It’s been a tough year, it’s the toughest game in the world,” said Schwerkolt of recent events.

“It has set us back a month but we’re fighting back.

“I’ve had to find more money to get the new car, but you find a way.

“Not having Lee has been the biggest thing, so we just can’t wait to have him back racing.”