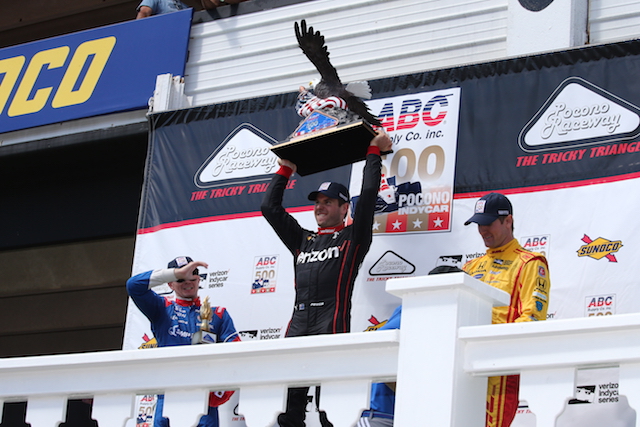 Will Power celebrates his 29th career win at Pocono

Will Power has prevailed in an action-packed ABC Supply 500 that saw Simon Pagenaud crash out of contention in the delayed Pocono race.

Team Penske ace Power pinched his fourth win of the season to close within 20 points of team-mate Pagenaud who suffered a heavy Turn 1 crash 43 laps from the finish.

One of nine different leaders which included Pagenaud, Power took control from lap 165 of 200 and was never headed to the finish.

“It was so hard to follow in traffic because we started very light on downforce but you know, we just kept adding and adding and adding. Then the team adjusted on the car a bit until it was awesome at the end and I was very good in traffic,” Power said.

Hunter-Reay started last, then led before losing a lap when the engine shut down while leading, however he managed to fight on and stage a remarkable comeback.

Power has now moved to within 20 points of Pagenaud with the series coming down to the final three races of the season at Texas, Watkins Glen and the double points round at Sonoma.

Josef Newgarden (Ed Carpenter Racing) kept his series hopes alive by finishing fourth ahead of Sebastien Bourdais (KV Racing). However Newgarden will not be in the field in the re-run of the unfinished Texas race this weekend as he crashed before that race was red flagged.

Helio Castroneves was lucky to escape injury in a frightening pit lane accident on lap 64.

Alex Rossi exited his pit box and was sent into the path after Charlie Kimball.

The contact caused Rossi to careen into the path of Castroneves had who just started his getaway from his pit bay with the Andretti-Herta machine riding over the top of the Penske driver’s cockpit.

“Everyone is going to have their own opinion but I was staying in the slow lane,” Rossi said who received a 20s penalty for avoidable contact and making contact with pit equipment.

“Kimball was obviously trying to come in his box, but then Helio was being released. So I don’t know. It’s very unfortunate.”

“Obviously I’m not in charge of releasing cars, so I don’t know the gap that needs to be had. I was sent. I knew there was a car to my right and I stayed in the slow lane. So, that was all I could do.”

IndyCar resumes with the rescheduled Firestone 600 at Texas this weekend.