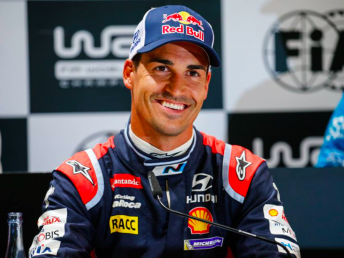 Dani Sordo will remain a factory Hyundai driver in the World Rally Championship for at least the next two years.

The 33-year-old Spaniard joined the Korean manufacturer for its return to the WRC in 2014 in a part-time role and has since emerged as a consistent points scorer through 2015 and 2016.

Sordo has scored three podium finishes behind the wheel of the i20 WRC with his latest arriving at last weekend’s Rally Germany, where he finished second behind eventual winner Sebastien Ogier.

The 2013 Rally Germany winner is lying sixth in the championship standings despite being forced to sit out last month’s Rally Finland due to injuries sustained in a nasty testing crash.

Armed with a fresh two-year deal until the end of 2018, Sordo is confident the team can provide him with a car to challenge for victories.

“Hyundai Motorsport has become like a family to me, so I am pleased to extend my contract for two more seasons,” said Sordo.

“I have had the pleasure of seeing and helping this young team grow into real contenders in just a few years and I am really excited to see where we can develop into the future, especially with the new regulations.

“My aim is to fight for WRC wins and podiums on a regular basis, and I know that is a realistic goal with this team.

“We’ve had our most successful season to date in 2016 but I know that there is so much more to come this season and beyond.”

Hyundai boss Michel Nandan has labelled Sordo as an ‘essential member of the team’ and is glad to see the driver extend his stay at the outfit.

The manufacturer has already confirmed that Kiwi Hayden Paddon will remain at the squad until 2018, although the future of third pilot Thierry Neuville is yet to be confirmed.

“We are delighted to continue our relationship with Dani as we look to build further on our inaugural years in the WRC,” said Nandan.

“Since we joined the championship back in 2014, Dani has been an essential member of our team.

“He is motivated and consistent, helping us to develop both on and off rallies.

“We have shared many happy memories together, including their excellent result at the weekend.

“We can now look forward to even more positive progress in the future.”