The trio, who all raced in the Australian Grand Prix when it was held in Adelaide between 1985 and 1995, will drive exotic supercars in stages of the rally, which coincides with the Adelaide Motorsport Festival (November 19-20).

The group of ex-F1 pilots headline the field for the Classic Adelaide’s ‘Marque Tour’ section, which is the non-competitive aspect of the rally that includes all 21 stages and finishes with a run around the famous Adelaide Parklands circuit on Saturday night.

Former Ferrari drivers Johansson and Capelli and ex-Minardi racer Martini are already set to feature prominently at the festival when they complete demonstration runs in machinery once raced on the Adelaide streets.

As previously reported, Johansson, who clocked up 79 F1 starts and 12 podium finishes, will step behind the wheel of a Ferrari 156/85 he drove during the 1985 season for a run on the former grand prix circuit.

Capelli is set to drive a Judd V8 powered Leyton House he piloted during the 1989 season.

Countryman Martini will return to the cockpit of a Minardi Cosworth V8 that propelled him to third on the grid at the 1989 Australian Grand Prix.

“Having the three Formula 1 drivers join the Tour on the Friday adds to the experience for those taking part in that, and those competing for the victory in the Classic Adelaide Rally,” said event spokesperson Tim Possingham.

“I’m sure the guys will enjoy their time driving on some of the best roads South Australia has to offer before jumping into their classic Formula One machinery on the circuit during the Adelaide Motorsport Festival.”

Adding to the F1 theme at this year’s festival is a former Gerhard Berger Benetton B186, which will be driven in demonstration runs at the event by Dunlop Series driver Josh Kean.

Kean has been enlisted to drive the Benetton by a private collector in Adelaide, who recently acquired the car.

The 23-year-old has previously completed a couple of shakedown runs at South Australia’s Mallala circuit and is looking forward to the event.

“The blokes I’m driving with are ex-Formula 1 drivers so it should be pretty exciting,” Kean told Speedcafe.com.

“I don’t mind going up against those guys as I’m racing most of the time these days.

“It’s just exciting to be in that car at an event with guys that would have raced against that car.

“I’ve only driven it a few times, once time in anger, and the thing was unreal.

“It is an absolute weapon and it is very hard to explain what it is like.” 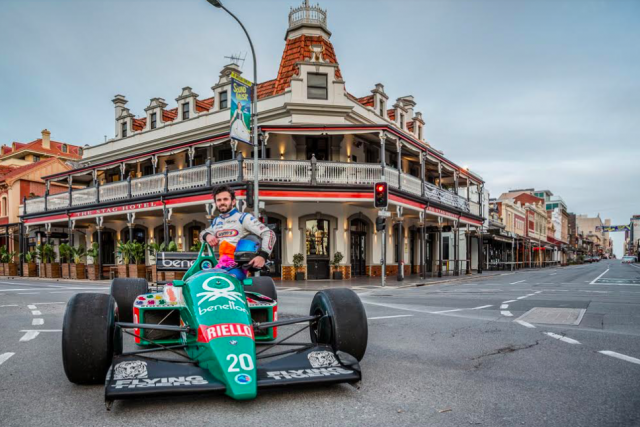